The secret turned out to be quite a whopper.

‘I had sex with Jared Leto back when I was presenting as a male,’ Arquette says in a Q&A published in Frontiers Magazine.

Then she added a comment about Leto’s manhood: ‘And, yes, it’s not only massive; it’s like a Praetorian Guard’s helmet.’

Leto, who won the Academy Award this year for playing a transgender woman in Dallas Buyers Club, has not commented on Arquette’s claim.

In the same article, Arquette is asked ‘What celebrity would you like to have wild, passionate, dirty animal sex with?’

She then describes herself as a ‘bleached golden goddess with delusions of grandeur needs to be put in her place.’ 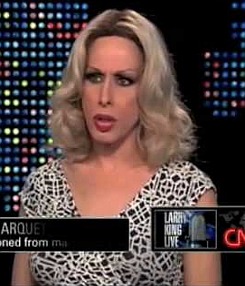 She is the sibling of actors Rosanna Arquette, David Arquette, and Patricia Arquette.

Arquette’s transition from male to female was documented in the film Alexis Arquette: She’s My Brother which debuted at the 2007 Tribeca Film Festival.