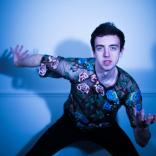 The dark art, pop track grew out of the horrendous events taking place in Russia and the deaths of trans people taking place across the globe.

The track projects a feeling of fear about who you love, capturing the feeling of our Chechen brothers and sisters whom are currently facing persecution for their identity.

‘I really hope to shake people’s conscience here, to highlight the true terror that can come with being queer,’ Andrea said of Forbidden Love.

The track also features a section of Sylvia Rivera’s 1973 Y’all Better Quiet Down speech. Rivera was a leader during the Stonewall Riots 50 years ago and fought for trans rights in New York City.

The show presents a school for singers, with the live shows resembling a similar format to X Factor. Andrea competed more than five years ago and made it through to the live shows but was booted off without the opportunity to sing for his place.

This rejection led to Andrea falling in and out of depression where he really struggled with writing and performing.

‘The show was a great experience for me, it taught me a lot about the process of performance, more so it taught me to take a different route in my music,’ Andrea said.

After facing rejection on the show Andrea moved to London to pursue his career in music. He studied Creative Musicianship at university which led him to thrive in his song writing and allowed him to meet an array of industry professionals in a safe space.

In those spaces he spent a number of years experimenting greatly and perfecting his craft.

‘I came here with very little confidence, I hadn’t really found myself, I was confused about my gender and had only recently come clear about my sexuality. It wasn’t long before all of that changed,’ Andrea said.

Andrea has released 5 singles with support from Spotify and has featured in a range of magazines where he has been able to play out his role as an activist as well as an artist.

More recently within his music he has combined the two and now ensure to promote realistic portrayals of the community in his tracks, opening up on many taboo subjects. With the support of Spotify and a number of queer individuals that he has connected with through social media, Andrea has a new-found confidence and said ‘2019 better watch out’.

Andrea debuted Forbidden Love on Wednesday night in London (30 January). During his performance he declared ‘that we as a community need to do more’.

‘We’ve all been chased at some point, isn’t it time we started doing the chasing?’ Andrea told the crowd.

Gay Star News is partnering with the Russian LGBT Network to help raise critical funds to help gay people escape Chechnya. The funds will go towards organizing passports, airfares and accommodation in safe houses for the hundreds of persecuted Chechens.