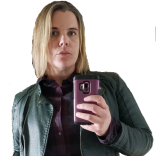 Let’s begin with a very brief introduction to asexual and aromantic orientations.

An asexual person does not experience sexual attraction.

Or, as some put it, does not experience an intrinsic need or desire for sexual intimacy with a partner.

Asexual people may still desire romantic partners, and may still have sex with their partners as a compromise in their relationship. Many don’t.

Romantic orientation goes in the same directions as sexual orientation – heteroromantic, homoromantic, biromantic, panromantic, and aromantic being the big ones.

This would have been a good thing for me to have learned before I was 30.

Learning about my sexual orientation

I’m asexual and aromantic, but it took me time to figure that out.

I didn’t know the word aromantic. But, I always knew I wasn’t the lovey-dovey kind and wasn’t keen on romantic relationships.

This made it more challenging to learn about my sexual orientation. I didn’t encounter the same opportunities for sexual relationships as people who were looking for romantic partners. So I wasn’t in the right situations to determine I simply didn’t want sex.

On a very rare basis, I attempted casual sex. I would use alcohol to impede the voice inside of me screaming to not do things.

This was mostly done with people I didn’t know and didn’t expect to get to know. It would happen especially when I was traveling and would likely never see the other person again.

That is the gist of why it took me longer to consider that I might be asexual.

I don’t recall when I first heard about asexuality. But, I remember not thinking much about it in my 20s.

It’s a diverse group of all orientations, romantic and sexual. They’re a group of people who are willing to offer their wealth of knowledge and experiences on sex, relationships, and the introspection required to determine what you really want out of those things, if anything at all.

The diversity in particular helped me reconcile an asexual identity with myself and my past.

I know what’s attractive – I find some people very nice to look at. But that doesn’t translate to anything sexual for me.

If they were lying naked in front of me and I wouldn’t be at all compelled to do anything with them. I have a libido, as many aces do, but I’ve never felt unfulfilled by taking care of that on my own.

There has been disagreement in the past about whether people with libidos are ‘fully’ asexual (whatever that means). But, it’s now widely accepted that we’re just as valid.

Making that known in public dialogue about asexuality could bring people in situations like mine to discover they’re asexual at an earlier age than I did.

These are things I had to learn from other asexual people rather than through external resources.

Cultural portrayals of asexuality were sparse, and seemed stuck on a stereotype of moral purity or stunted growth with no intention of developing recurring asexual characters.

The community’s overall beaming excitement at the character Todd Chavez from the Netflix show BoJack Horseman comes from the fact that it’s a long overdue portrayal of a full complex person who happens to be asexual, and who is also discovering that within the plot of the show.

I can only imagine how eye-opening this would have been for me if I hadn’t already discovered asexuality before seeing the show.

The asexual presence at Pride events and inclusion in LGBT+ organizations has also noticeably grown since I joined the community.

My tradition around the local Pride parade has changed. It’s gone from going with one or two friends as observers to going with a growing group of local aces.

We’re seeing more and more ace flags and signs at the Pride festivities every year. This includes, and is perhaps because of, vendors who sell ace flags among the rest of their LGBT+ merchandise.

Two of my recent indulgent purchases are an ace flag hoodie and a pair of stiletto heels in ace flag colours.

The stilettos are reserved for strutting around the home while drinking and looking stylish, but I’ve worn the hoodie a lot in this cooling autumn season.

The only people to comment so far are from the local ace group, but I hope that if any stranger on the street recognizes what the black, grey, white, and purple symbolize, that they feel reassured that it’s okay to be asexual. Visibility is important and it’s growing.

I would like to see it reach a point where people like me can discover this part of themselves earlier in life.

Sites like AVEN and events like Asexual Awareness Week aim to do just that, while also educating the general population with the message that this is a healthy part of who we are.

AVEN (The Asexual Visibility and Education Network) is the world’s largest online asexual community and archive of resources on asexuality.