Anderson Cooper has ‘sudden surgery’ that keeps him off the air

Australian rugby pro Simon Dunn has embarked on an Olympic dream and made history while doing so.

Dunn is the first openly gay man to represent Australia in the sport of bobsledding and is training to represent his country in the 2018 Winter Olympics in South Korea.

‘I was approached by a member of the Australian team through my rugby club in Calgary,’ he tells samesame.com. ‘Rugby is an easy crossover sport to bobsleigh, as the training is similar and the main idea is to run hard and fast.

‘My years playing rugby for the Sydney Convicts in Sydney definitely helped my conditioning to be ready for the sport.’

Dunn, whose popular Instagram page features photos of him training as well as some shirtless selfies, is raising money to fund his training.

He states on his GoFundMe page: ‘As an Australian bobsledder, I am competing in an underrecognized, and hypermasculine sport. As an openly gay athlete, I feel passionate about representing my country, and redefining the identity of the sport, one unmarred by sexual orientation.’ 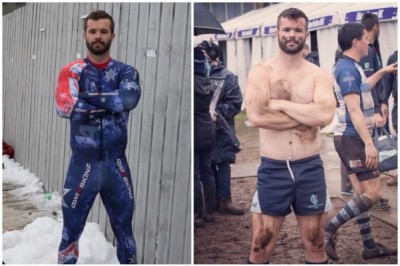 Why I became a drag activist in South Korea