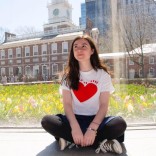 When I think about all the past crushes I’ve had that I didn’t quite realize were crushes, perhaps I could argue that deep down I always knew.

However, the truth is that I didn’t.

The label bisexual wasn’t one that I claimed until I was sixteen. This was when I came out to myself. To me, that felt late. It seemed wild that I hadn’t realized sooner when I was so clearly attracted to more than one gender.

Yet, to others I was still too young to know. I was only a teenager after all, they said.

I realised it was these arguments I’d been surrounded by all my life that prevented young people like me from calling themselves bisexual. But, it only made me more determined to talk about my identity openly and proudly.

‘There’s nothing wrong with switching labels’

Sometimes, people talk about labels as if they’re a trap. Once you’ve told the world you’re one thing or another, there’s a sense of obligation to stay true to it. This happens especially when that label lacks positive visibility.

I’ve seen the disappointment in the bi community when somebody who once identified as bisexual decides to change that. I understand that sadness, I do; more people question the validity of our identities and we lose a role model.

However, I worry that this puts people off claiming the word bisexual for themselves when it’s what feels right. We need to remember that sexuality, or the way we see our sexuality, can change – and that’s okay!

There’s nothing wrong with switching labels, what matters is that we feel comfortable. I hate the idea of anyone feeling trapped by a label, feeling obliged to stick to a community they’ve said they represent.

Equally, I hate the idea of anybody being scared to claim a label just in case they start to feel differently in the future.

They shouldn’t have to worry about that and deserve to feel proud of how they feel right now. Anyone should be able to feel a sense of home in the community they feel they belong to, without fearing the consequences of potentially walking away from it someday.

Despite people sometimes thinking that I’m too gay to be bi (a perception that opposes the reaction I received when I first came out), I am bisexual. I’ve felt that way for four years.

I think I’ll feel this way forever, but that’s not something I can or should have to promise in order to be valid. Labels are words that help us understand ourselves and each other, but they don’t exist to keep us captive.

So if you’re bisexual, I encourage you to be proud of that. You’re not too young to know, and there’s no test. What you feel you are, you are, and future possibilities shouldn’t be of concern to you.

The present day is what we’re living in, and you are valid and supported.

Your bisexuality is real regardless of what anyone else says. Your bi visibility is so appreciated and the community is lucky to have you.

101 celebs who have come out as bisexual, pansexual, queer and fluid