X-Men director Bryan Singer is going to be a father.

The mother of the child is actress Michelle Clunie, his ex-girlfriend.

Clunie, who played Melanie for five seasons on Showtime’s Queer as Folk is seven-and-a-half months pregnant and wrote on Facebook Wednesday (22 October): ‘We dated. We broke up. He came out to me. We still loved each other and so made a pact we would start a family together some day. We are now 7 1/2 months pregnant and very excited about co-parenting and starting our little 21st century, progressive, American family.

‘I have never been happier,’ Clunie (pictured below) added. ‘All your warm wishes, support and congrats really carried me through this day of almost every article getting it wrong. Hey, as long as the story is the only thing that breaks today, I’m fine.’

Singer had a rough time earlier this year when a lawsuit, later dropped, was filed against him by a man alleging sexual abuse by Singer. One of his staunchest defenders throughout the ordeal was Clunie.

Singer’s rep Simon Halls tells E! Online: ‘I can confirm that Michelle Clunie and Bryan Singer are happily expecting a baby together in early 2015. Best friends for 25 years, mother and father are both very excited about the upcoming birth and look forward to co-parenting the child together. The pair have been planning this baby for years and have been trying for the last two.’

Singer had been openly gay for several years but said earlier this year it would be more accurate to describe him as bisexual although he is fine with with either term. 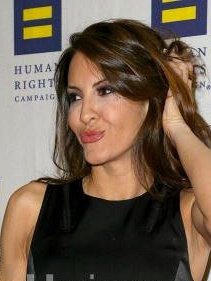