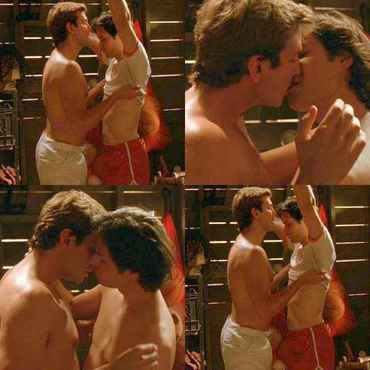 The 2001 summer camp comedy Wet Hot American Summer may not have been the big hit as some of Bradley Cooper’s later movies but it’s a cult fave that people still talk about.

During a visit to Late Night With Seth Meyers on Monday (14 December), Cooper talked about reprising his role in a Netflix prequel to the movie earlier this year and reuniting with co-stars Paul Rudd, Amy Poehler and Elizabeth Banks, among others.

In the film, Cooper had a memorable sex scene with Michael Ian Black that took place in a tool shed. Both men wore white tube socks throughout (see video below).

Cooper tells Meyers the scene with Black was not choreographed.

‘We put a lot of that sweat stuff, that glistening gel (on). I remember them applying it to Michael and I’m like “This is crazy.” It was nuts. But the joke of that scene was to make it like the one serious scene in the whole movie … shot seriously, lit well.

The film takes place during the last day at a fictional Jewish summer camp in 1981. It was written by David Wain and Michael Showalter and directed by Wain. The duo created the limited-run series on Netflix with Wain again directing.