When she married Bruce Jenner in 1981, Linda Thompson did not know that her Olympic champion husband secretly identified as a woman.

But by 1986 and the birth of two sons, the couple was divorced and Jenner’s gender dysphoria was the reason.

‘If Bruce had told me about his gender issue when we first began getting romantically involved, I would not have married him. Pure and simple,’ Thompson writes in Huffington Post.

‘But looking back, I’m so grateful to God, the universe, and Bruce that I didn’t know, and that Bruce played the role in my life that he did.’

At the time of their marriage, Thompson was best known for being a regular on the TV series Hee Haw and for her four-year relationship with the late Elvis Presley which was portrayed in the 1981 television movie Elvis and the Beauty Queen.

‘I knew he should be afforded the dignity to reveal that truth on his own time and in the way he sees fit,’ she writes. ‘I have respectfully kept his secrets private and would have taken his confidences to my grave had he not spoken out.’

Three years before meeting Jenner at a tennis tournament in 1979, Thompson recalls laying in bed with Presley as they watched Jenner compete on television in the 1976 Olympics in Montreal where he would win the gold medal in the decathlon.

She quotes Presley as saying: ‘Damn if that guy is not handsome! I’m not gay, but damn, he’s good-looking!’

Their relationship began as Jenner was in the thick of his acting career which included the lead in the feature film Can’t Stop the Music and a role on the TV series CHiPs.

‘Bruce was pretty much the perfect specimen of a man,’ Thompson writes. ‘Men aspired to be like him and wanted to hang out and play sports with him, and women were clearly attracted to him. The Bruce I knew back then was unstudied, affable, and seemingly very comfortable in his own skin. So it seemed.’

The end of an ‘idyllic life’

But their ‘idyllic life’ changed forever when son Brandon was 3 and son Brody was 18 months. Jenner told her his truth.

‘I have lived in the wrong skin, the wrong body, my whole life,’ Thompson quotes him as saying. ‘It is a living hell for me, and I really feel that I would like to move forward with the process of becoming a woman, the woman I have always been inside.’ 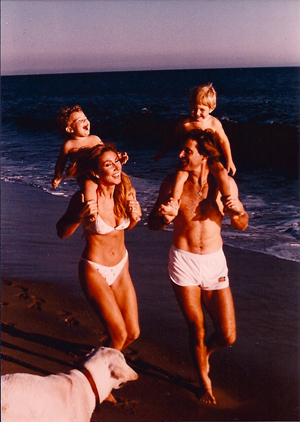 Thompson was blindsided writing that she had not seen a single sign.

‘I was living in my little Malibu cocoon of marital, motherly bliss with my world-champion, muscular, athletic, handsome husband,’ she writes. ‘So my reaction to Bruce’s shocking declaration was one of confusion, even desperation.’

She suggested therapy and found a therapist who specialized in gender dysphoria. Thompson was told her husband’s female identity ‘will never, ever go away.’

Jenner wanted to leave the country for sexual reassignment surgery then return to the US as a woman. He suggested being reintroduced to Brandon and Brody as ‘Aunt Gertrude.’

After six months of therapy, the couple split mainly because being ‘married to a woman was not what I had envisioned for my life.’

‘I mourned the death of my marriage, my man, and my dream of enjoying a lifetime of family togetherness. But I was also empathetic to, and mourned for, the pain that Bruce had experienced every day of his life.’

They divorced and Jenner began taking female hormones and preparing to transition. But he changed his mind by 1991 when he married Kris Kardashian and became father to two more children and stepfather to the now famous Kardashian children.

Thompson is supportive of Jenner in her essay but she does point out that he was a mostly absentee father to the sons she had with him missing holidays, graduations and going long stretches with no contact.

‘After Brandon and Brody were grown and I did reveal their father’s issue, I think the knowledge helped them put the pieces together and explain some of Bruce’s dysfunctional parenting,’ she writes.

‘After having harbored his secret, and feeling in my heart and mind that I have protected him through these years, I can now breathe a little easier, knowing he now has found the strength and the courage to fulfill his dream. He can finally realize his need to be who he authentically is, who he was born to be. That takes tremendous courage. For that I commend him.’