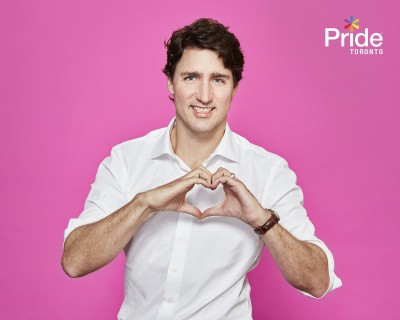 Trudeau, 44, is a passionate advocate for LGBTI rights who had already marched in the pride parade before his ascended to office last October.

‘Very much look forward to being there again, this time as PM,’ Trudeau tweeted.

The parade is scheduled to take place on 3 July. Toronto’s first-ever Pride Month will launch on 1 June and will have the theme of ‘belonging and inclusion.’

In his 2104 memoir, Common Ground, Trudeau said gay marriage, abortion and legalizing marijuana were his ‘core principles’ and that he would not ‘simply pander’ to his opponents but had to ‘adhere to my own views.’

During his campaign, Trudeau pledged to introduce legislation to add gender identity to the Canadian Human Rights Act and the hate crime provisions of the Criminal Code, and end a ban on gay blood and organ donations, which was expanded under Canada’s long-time Conservative Prime Minister Stephen Harper.

It was last October that Trudeau ousted Harper in a surprise victory after his Liberal Party won 54% of the seats in parliament.

The son of former PM Pierre Trudeau is the second youngest leader in the country’s history and has vowed to appoint more LGBTI people to government.