But Uy, known simply as Chef K, tells Gay Star News she had to contend with more than just cooking challenges on her way to the first prize of $100,000 and a 2013 Ford C-Max Hybrid.

‘There was not another gay person in the top 16 so there were some who thought they just kept me as the token lesbian,’ she says. ‘I got little comments from some competitors like, "YOU made it this far?" "You’re Charlie Sheen’s chef. Do you just make burgers and hot dogs?" There was like a lot of bullying – men with big egos.’

‘I didn’t pack my bags,’ she adds. ‘I don’t know why they were still talking when we were all there to cook. It was to my advantage. The more I heard those words, the more I became focused and used those words to empower me.’

After making it to the final four, Chef K beat out fellow finalists Diane DiMeo, Gregg Drusinksy and Sarah Schiear.

‘I used recipes from my family and cooked from the heart,’ she says. ‘I made sure I didn’t waste any minutes and I used every technique and training. My rule is I’m only as good as my last meal.’

Upon winning, Chef K said she’d trade in her prizes to make gay marriage legal. So she is donating a portion of her winnings to the Human Rights Campaign and other LGBT causes.

She and girlfriend Brittany Wiener have been together for a year. Ironically, they met when Chef K was on an episode of the Bravo show Millionaire Matchmaker in an episode to air 19 March.

With her numerous tattoos and outgoing personality, Chef K is not lacking in confidence when it comes to her culinary abilities.

Before going to work for Sheen a year ago, she had already worked for director James Cameron (Avatar, The Titanic), American Idol producer Simon Fuller, and the royal family of Saudi Arabia.

‘Anything can happen,’ she says. ‘When you picture something so much, the next thing you know it’s happening. That’s what happened on the show. There was 8,500 people (trying out) to begin with so it was beating all the odds.’

As for Sheen, he was publicly supportive of his chef’s participation on The Taste and tweeted Tuesday (12 March) that ‘the Sheenius only works with #winners.’

‘He’s so gracious,’ she says of the Anger Management star. ‘He’s known to the world as this bad boy character but he says, "Can you?" "Please" and "Thank you." He remembers stories I tell him and he’s there.’ 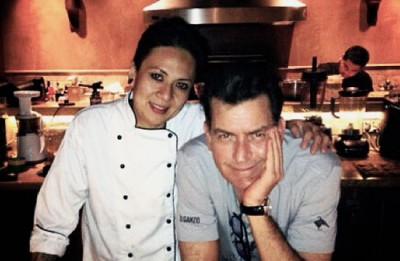