Author and activist Dan Savage is furious with the parents of an Ohio transgender teen who committed suicide this week.

Leelah Alcorn, 17, died Sunday after being struck by a truck in Union Township, Ohio. She had left behind a lengthy suicide note on her Tumblr account.

In the note she detailed how she was devastated by the lack of support from her parents who would not allow her to begin to transition and instead took her to Christian therapists, took her out of public school and cut off her access to social media.

She wrote in the suicide note that her depression deepened even after her access to social media was restored by her parents.

‘Either I live the rest of my life as a lonely man who wishes he were a woman or I live my life as a lonelier woman who hates herself. There’s no winning. There’s no way out. I’m sad enough already, I don’t need my life to get any worse. People say “it gets better” but that isn’t true in my case. It gets worse. Each day I get worse.’

Savage, founder of the It Gets Better campaign to try and prevent suicide among LGBTI youth, wants to see Alcorn’s parents charged with child abuse, neglect, reckless endangerment and manslaughter.

‘We know that parental hostility & rejection doubles a queer kid’s already quadrupled risk of suicide—rejecting your queer kid is abuse,’ Savage tweeted. ‘#LeelahAlcorn‘s parents threw her in front of that truck. They should be ashamed—but 1st they need to be shamed.’

Savage added: ‘If Tyler Clemente’s roommate could be prosecuted—and he was—then the parents of #LeelahAlcorn can & should be.’

(Clemente is the Rutgers University freshman who in 2010 jumped to his death from the George Washington Bridge after his male roommate and a female student used a webcam to view, without Clementi’s knowledge, Clementi kissing another man.)

The dead teen’s mother, Carla Wood Alcorn, continued to refer to her dead child as a male even in death.

In a message on her Facebook page the day of the suicide she posted: ‘My sweet 16 year old son, Joshua Ryan Alcorn went home to heaven this morning. He was out for an early morning walk and was hit by a truck. Thank you for the messages and kindness and concern you have sent our way. Please continue to keep us in your prayers.’ 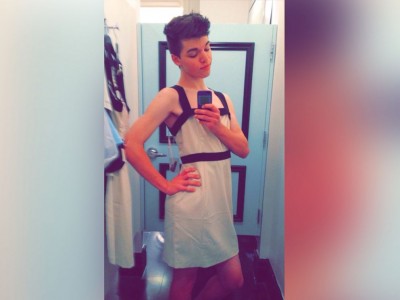