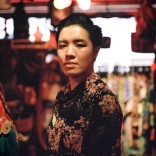 Pride Season, also known as the time when: 1) all corporations suddenly decide they want a slice of the rainbow cake even though they’ve done next to nothing for the community in the other 11 months of the year; 2) cis queers take up more space than they already do.

I recently came across this piece by Hong Kong Tatler titled: Pride Month Roundtable: How LGBT-friendly is Hong Kong?

A first glance at the featured image tells me there are no trans people in the article. (Not because none of them ‘look trans’, but because the handful of local trans figures I know of aren’t there.)

The Edipresse-owned publication markets itself as ‘the ultimate guide to luxury lifestyle in Hong Kong, featuring award-winning coverage of exclusive high society events attended by the city’s most influential and glamorous people’.

So I suppose I wasn’t surprised by this faux pas given its brand and readership.

I also wasn’t surprised because in the two short years I’ve started identifying myself as a member of the community,

In a public status I wrote ‘I guess most trans people don’t live glamorous enough lives to be featured in your magazine because we’re too busy trying to figure out how to survive’.

Visibility from prominent figures is important.

But it doesn’t change the fact that the plight of trans and intersex individuals is vastly different from the issues cis gays and lesbians are concerned about.

Hong Kong for example, is in need of a more progressive Gender Recognition model that would save hundreds of trans people from having to go through forced gender confirmation surgery prior to being able to change their gender markers on their ID cards, and intersex children from being operated on without consent.

Making cis gays and lesbians – who ask for no more than what their straight counterparts already enjoy – the face of our movement might make it more palatable to the cis-heteros, but it does little to serve those more marginalized in the community.

Marginalized not only in terms of gender and class, but also race.

In the Euro-American English-speaking world, people of color is generally defined as ‘non-whites’.

In Hong Kong, where 92% of the population is ethnic Chinese, ‘ethnic minorities’ usually refer to those of South, Southeast Asian and African descent.

As a South Asian friend pointed out to me, non-white, non-Chinese queer people were also absent from the article.

Do lesbians just want to stay home with their cats?

I always revisit this conversation I once had with a cis gay friend about the hypervisibility of cis gay men (almost always able-bodied, chiseled and white or white-adjacent) at pride parades.

His response was: ‘well maybe the rest of them don’t like to party. The lesbians just want to stay home with their cats’.

Or maybe we should think about why the rest of the community feels excluded from pride season festivities?