Margaret Cho, fan of ‘tasteless, garish stuff,’ happy to be a part of revamped Fashion Police

Eddie Redmayne could find himself in Academy Award contention again less than a year after his Oscar win for The Theory of Everything.

The 33-year-old actor plays transgender pioneer Lili Elbe – one of the first known recipients of sexual reassignment surgery – in The Danish Girl which will hit theaters in late November.

‘I found it profoundly moving,’ he says in a new Out magazine cover story. ‘I knew nothing about it going in. It felt like it was a piece about authenticity and love and the courage it takes to be yourself.’ 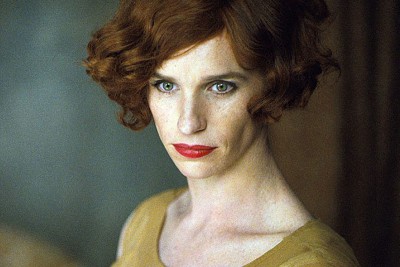 Photos of Redmayne in character show him to be quite convincing as a woman – something that doesn’t necessarily surprise him.

‘I can also totally see that other people see a femininity in me,’ he says.

Redmayne sought out the advice of real-life trans women while researching the part.

‘People were so kind and generous with their experience, but also so open,’ he says.

‘Virtually all of the trans men and women I met would say “Ask me anything.” They know that need for cisgender people to be educated.  I felt like, I’m being given this extraordinary experience of being able to play this women, but with that comes this responsibility of not only educating myself but hopefully using that to educate [an audience]. Gosh, it’s delicate. And complicated.’

The film, set in the 1920s, tells the story of a painter named Wegener, who was persuaded by her wife, also a painter, to pose in women’s clothing for her.  This opened up a whole new world for Wegener, who later began her male-to-female transition and changed her name to Lili Elbe.

Elbe traveled to Germany in the 1930s to have gender reassignment surgery, which at the time was virtually untested. After a series of operations, Elbe died when her body rejected a uterus that had been transplanted with the goal of allowing her to have children.

Redmayne says he learned a lot about gender identity because of the role.

“That it’s fluid … and also that it needn’t be labeled. My greatest ignorance when I started was that gender and sexuality were related. And that’s one of the key things I want to hammer home to the world: You can be gay or straight, trans man or woman, and those two things are not necessarily aligned.’