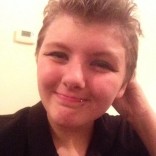 I was trying to research UK based queer history when I started writing this poem.

As we reached the 50th anniversary of partial decriminalization of homosexuality in the UK, the only thing I could link to this  landmark success was the Wolfenden committee report of 1957.

I was certain that there were plenty of key individuals involved in getting this law passed. I have been entirely unable to find any noted individuals prior to those who formed LGSM in the 1980s.

Currently, if I look for queer history I will come across one of two things: legislation that has been passed, and celebrities coming out. I do not deny that these are both very important things.

Celebrities coming out shows people that we exist. It presents the idea the being queer isn’t a thing hidden away at the back of a closet, but a part of people you can relate to.

It reduces the idea that being queer is something to be ashamed of.

Who petitioned and protested?

Legislation secured these rights, but I want to know about the people who fought for these rights.

Who argued for this legislation? Who petitioned and protested? Laws don’t just change.

There must have been people involved and I want to know their stories. I want to know who paved the way for all the rights I now have as a queer person in Britain.

My poem is based on this, and also the fact that we haven’t achieved equality yet.

People assess and quiz me on my sexuality. I constantly have to tick their boxes of what it means to be bisexual.

In reality, I can tell if I’m sexually attracted to multiple genders for myself. In recent decades we have gained the ability to be visible, but we still are not allowed to be too visible.

I still have to check around me before I hold my partners hand in public.

Progression is a wonderful thing. I was lucky enough to be able to find a word for how I felt when I was 14 and first experienced attraction to women.

It is essential that we know our history

Bi erasure is so often presented as ‘just a phase’ or an experiment.

Coming to terms with the idea that some people will never believe that you know your own sexual identity is a thing I have learned to do now.

But at 14, when my parents dismissed it, of course it hurt. For many it simply forces them back into a closet that it is so difficult to leave in the first place.

It is essential that we know our history.

Not only to look back and thank those who paved the way for the modern day. But also to see where we can go next.

But multiple people on twitter still tell me gay love is unnatural, gay love should be hidden and that I’m wrong for who I’m attracted to. I suppose this was my own little way of protest.