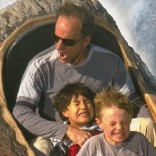 Tom Leahy, who teaches social studies at the Conway Springs Middle School in Kansas admits he made some mistakes.

He made these mistakes because he was deeply disturbed by the bullying and homophobic culture he saw in his eighth graders. So he cut some corners and now his job is on the line.

It all started when a social studies exercise went horrifically wrong. He had split the students into groups and told them that they were each a fictional colony. They were to develop their own Bill of Rights, and lay out the principles on which to build their societies.

He expected kindness and fairness. What he got was homophobia. At least one of the colonies declared it would ostracize LGBT people and reject them from their world.

Leahy saw some deep, hurt reactions from other students, and he felt compelled to challenge those attitudes immediately.

So he showed them all the viral video film Love Is All You Need, by Kim Rocco Shields, in which the world is reversed and it is heterosexuals who are the bullied and persecuted.

The film is no holds barred in its depiction of the damage of bullying. Any kid can find it on YouTube and around 3,700,000 people have seen it there already. You can watch it here and judge for yourselves.

‘I didn’t want just a dorky little film, I wanted something that was important, something that was serious. So that’s the one I came up with. I’m not saying what I did was very smart. It really wasn’t, but I’m a spur-of-the-moment kind of guy, and it seemed right at the time,’ Leahy told the Witchita Eagle.

Now Leahy has been removed from the classroom, and awaits a school board meeting on Monday (9 November), where he is being asked to offer his resignation.

Here is my letter to him, and to the board:

Dear Mr Leahy and the Conway Springs School Board,

You are letting the bullies win.

I am not calling parents, who want to approve of graphic material before it is shown to their kids, ‘bullies’. They are due an apology, and a promise it won’t happen again.

But Mr Leahy was battling a disease in your kids. While his choices were not well thought out, the harm he was seeking to prevent should be a much higher priority.

I am the gay dad of two seventh graders. The colony exercise that took place, in which a mob had declared they would reject their dad from the world, would have devastated and shamed them. They would have suffered in silence, but the harm would go deep.

So too, was the harm felt by a number of your LGBTI students. They, in various stages of self-awareness, are likely hidden from you. That does not free you from the need to protect them, it means you have even a greater responsibility to do so.

I am sure you found the suicide of the lead character, in the film Mr Leahy showed, disturbing. What is more disturbing is what she represents really happens in your community. She is my kid. She is the LGBTI kid. She is every child that does not fit the ‘norm’.

When you fail to protect these kids, when you condemn those who do, you give our children no place to turn – you inspire them to hide, to self-harm and even kill themselves.

Did you ask parental permission to do THAT?

Mr Leahy, I don’t know what pressure you are under to resign, but you must resist it. What you did in showing the film at risk to yourself was heroic.

Your job is not yet over. Your community has diverted the topic from homophobia to parental notification procedures. You need to help fix that. Then the real lesson still needs to be learned.

If not, the film you showed will not be just a conversation starter, it will be a prophesy. Your sacrifice will have been for nothing.