When Alec Mapa was presented with the Outfest Fusion Achievement Award in Los Angeles on Saturday night, the man known for making audiences laugh on shows like Ugly Betty and Half & Half couldn’t help but get a little serious.

The actor and comic mentioned how Desperate Housewives creator Marc Cherry – who Mapa worked for on Housewives and the sitcom Some of My Best Friends – once said to him that on paper, his career was not supposed to exist ‘and that it only existed through sheer force of will.’

He’s an openly gay Filipino performer who got his first big break starring on Broadway in M Butterfly and has gone on to appear in such TV shows and movies as Ugly Betty, Switched at Birth, Some of My Best Friends, You Don’t Mess Around With the Zohan, Half & Half and Connie & Carla.

‘I think it’s pretty clear to see that you can’t kill me with a stake,’ Mapa,’ he joked after being presented with the award by longtime friend Sandra Oh.

The crowd, used to laughing when Mapa is behind a microphone, fell into a hush as the 48-year-old performer shared with them what has made him so determined to tell his story to the world through his work.

‘Twenty-seven years ago I was in Washington DC when they unfurled the AIDS quilt for the very first time. And there were 12,290 panels and each panel memorialized a person who had died from AIDS. … As I walked along the panels, you could see entire life stories in each and every panel. You could see that this person was a dancer, an artist or a devoted wife and mother.’

‘And I was looking at a panel of someone who had clearly been a drag queen because this one panel was crammed with more sequins that you could possibly have – it literally looked like Liberace had thrown up – and you could see from the care and detail devoted to this panel that this person was deeply missed and deeply, deeply loved.’

‘And I said out loud to the stranger standing next to me: “Why do they hate us so much?” And the person next to us said: “It’s because they don’t know us.”’

‘So if you’re an artist, a dancer, a writer, a photographer – I urge you to tell your story. It’s valuable, it’s needed. People want it, people are longing for it.’

Mapa received the award at the Egyptian Theatre before the screening of the film Alec Mapa: Baby Daddy, a documentary build around his stage show of the same name which tells the story of raising his adopted son, Zion, with husband Jamie Hebert who produced the film.

‘Most of all, I would like to thank my son Zion,’ Mapa said as he concluded his acceptance speech, ‘because he’s given me the best possible story to tell.’ 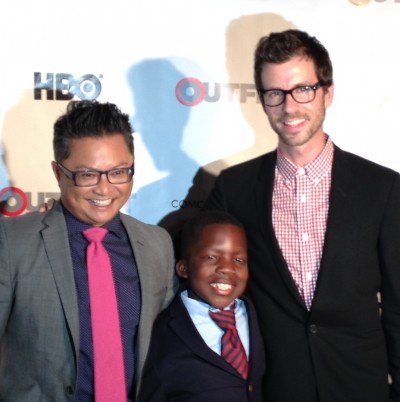