‘I’ve snogged all of them’: As Wannabe turns 20, we relive the Spice Girls’ gayest moments

As a closeted gay athlete, it was Bryson Jones’ worst nightmare.

While a college student at Mercer University in Georgia, one of his teammates on the college soccer team found out his most closely-guarded secret.

Already depressed due to injury during his sophomore year, Jones went to an off-campus Halloween party in 2010 and a chain of events led him to the brink of suicide.

While at the party, someone broke into Jones’ car and stole several items including a backpack belonging to a teammate.

‘This particular teammate had found out that I was gay the night before by reading text messages on a friend’s phone,’ Jones writes in a column for Outsports published Wednesday (6 July).

‘Upset that his expensive hiking backpack was gone, he threatened to out me to my team if I didn’t pay for it.’

Jones was backed into a corner and bought the teammate a new backpack. Although the immediate threat had been averted, he was left feeling desperate.

‘The fear of my teammates finding out I was gay scared the life out of me,’ he writes. ‘I no longer had control over who knew my secret. My biggest insecurity was now in the hands of someone who was willing to use my sexuality against me as blackmail.’

Not long after, Jones found himself in his apartment holding a bottle of pills and trying to find the courage to swallow them.

But he eventually began thinking about the pain his suicide would cause his family and decided not to go through with it.

‘I decided my life was worth living.’

He stayed closeted until after graduation. But after returning to Mercer for a teammates wedding, he came out to most of them.

Since he had already come out as a Lady Gaga and Beyonce fan during college, not all of them were entirely surprised.

‘One teammate in particular called me on my drive back to Virginia with so much remorse for ever making me feel uncomfortable or unloved,’ Jones writes.

‘I pulled over and sobbed after that phone call. One of the people I was most fearful of coming out to loved me for me.’ 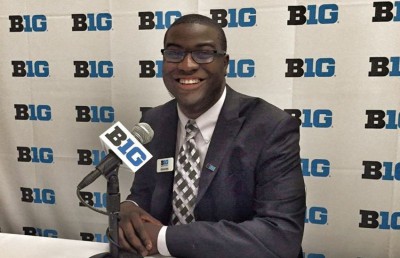 After that wedding, Jones continued to come out to people – including his Christian family.

He has also forged a successful career as an openly gay man in college athletics. Since last year he has worked as the assistant director of communications at the Big Ten Conference in Chicago, Illinois.

‘It is by no means easy being gay in today’s society, especially in the world of college athletics,’ he writes.

‘Being black and gay adds another entire level of difficulty, but I’ve been getting through it. … I continually think, “is there a need to hide myself from the world anymore?”‘I truly don’t think there is.’