On Sunday night’s episode of The Amazing Race on CBS, life partners Josh Kilmer-Purcell and Brent Ridge barely managed to stave off elimination from the reality show competition.

The couple, better known as The Fabulous Beekman Boys because they have their own reality show about life on their farm in upstate New York, took to Facebook Monday (29 October) to address why they have not been as visibly affectionate as some of the other couples in the race.

‘Of the five legs shown thus far, four have been in Muslim countries and homosexuality is illegal in every country we’d visited or passed through,’ they explained. ‘Since we are guests in these countries, we chose to not embrace or kiss for practical and respectful reasons.’

‘We were literally relying on the kindness of strangers and cab drivers and challenging their beliefs would not have been strategically smart nor neighborly,’ they added. ‘To be completely fair, perhaps many of the great people we met along the way wouldn’t have had any issues with our relationship. But unfortunately, we didn’t have the time to get to know them better personally.’

The Amazing Race, now in its 21st season, teams of two people, who have some form of a preexisting personal relationship, racing around the world in competition with other teams. Teams are progressively eliminated until three are left. At that point, the team that arrives first in the final leg is awarded the grand prize of $1 million. 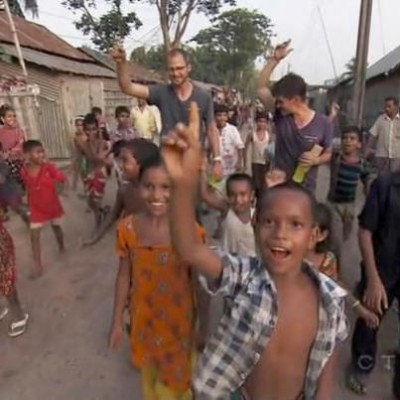