That partner, an American citizen named Jerry Enriquez, had killed himself two weeks earlier in Canada. The couple had left Oregon to live in Canada because Knight, a French citizen, had a student US visa that had expired.

It was their only way of remaining together because as a gay couple, Enriquez could not sponsor his partner of nine years for citizenship.

‘Up to the end, [Knight] expressed how he wished that no couple would have to endure what he and Jerry had to in trying to stay together,’ their friend Michael Mew told Queerty. ‘They would both be alive today if America had gay marriage.’

Knight, who had made 20 films for Lucas Entertainment, was studying acupuncture at the time of his death.

He expressed his frustration with the immigration situation two days before killing himself writing on his blog: ‘By the end of my studies, my visa was going to expire, and I would be sent back to Europe. No other way around it. Again, it does not matter whether gay marriage exists in California or Washington, if one is not American, it will not apply. Therefore if you are in love but not straight, you are fucked!’

He and Enriquez had gotten married in Vancouver, Canada, in 2011 where they went to live after Enriquez landed a job with Lululemon managing a clothing line.

But things began taking a tragic turn after Enriquez lost his job at Lululemon after a year. Without a work visa, the couple was not going to be able to stay in Canada or live in the US together. 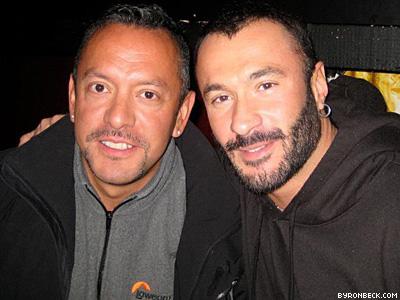