As the Go-Go’s wrapped their farewell tour the this week, lead singer Belinda Carlisle son was among those feeling the end most deeply.

The band, formed 38 years ago, has been in existence all of James Duke’s Mason’s and he was among those at the Greek Theatre in Los Angeles for the final performance.

‘A huge chapter of my life will come to an end,’ he wrote. ‘Some of the best memories I have are of being on the road with The Go Go’s – sitting on the tour bus, driving across America, hanging out and having fun with my Mom and my “aunts”, as I have always thought of them.

‘To think that it’s truly over is hard for me to take in. Yes, they may do one-off shows here and there, but the experience of touring with the band that was such a big part of my childhood and my life up until now is probably over.’

Those ‘aunts’ are Charlotte Caffey, Jane Wiedlin and Gina Schock. Bassist Kathy Valentine left the group in 2013 and was replaced by a touring member Abby Travis. The all-female group is best known for the MTV-era staples We Got the Beat, Vacation, Head Over Heels and Our Lips Are Sealed.

‘There’s never been a band quite like The Go-Go’s – they literally are one of a kind,’ Mason writes. ‘They are, to this day, the only all-female band that both wrote their own songs and played their own instruments to top the Billboard 200 albums chart. … They’ve still got an authenticity and raw energy to them that very few bands have today, especially in this age of electronic music and auto tune.’

The proud son is irked that the Go-Go’s have not been inducted into the International Rock and Roll Hall of Fame.

‘If the Rock-N-Roll Hall of Fame wants to ignore the contributions that this incredible, pioneering group has made to music, then that’s up to them,’ he writes. ‘But history cannot be re-written, and The Go Go’s will always have a firm place in it.’ 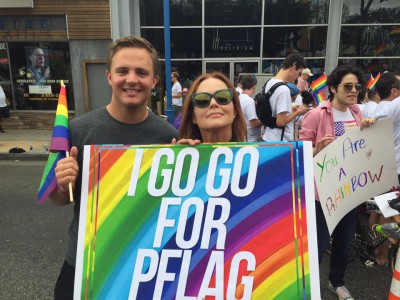 Carlisle embarked in a solo career when the group split for a time in 1985. She earned a Grammy nomination and had several hits including Mad About You and Heaven Is a Place on Earth.

She has been quite publicly supportive of her son since he came out publicly. He has become active in politics in West Hollywood where he lives and marched with his mom in the Los Angeles Pride Parade in June.

‘Proud to be the son of a Go-Go and grateful to have had the privilege of seeing them up close in action over the last 24 years. It’s been quite a ride!’