Last spring, the character of Maya on the CBS soap The Bold and the Beautiful was revealed to viewers to be a transgender woman.

The character is played by non-trans woman Karla Mosley as have most trans characters in movies and television been.

The the Emmy-winning soap has a male transgender character involved in the storyline is played by transgender actor Scott Turner Schofield. 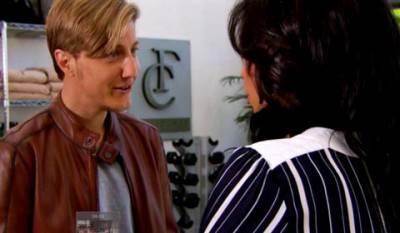 Schofield plays the character of Nick who has served as something of a transgender mentor to fashion model Ava who is a longtime friend.

‘I’m thankful for this year that I got to realize my dream of starting my television career as the first openly trans person in daytime television and for the way that all happened,’ Schofield tells Gay Star News.

‘I’m thankful for the amazing and beautiful story that The Bold and the Beautiful is telling and that I can be a part of it.’

Schofield knows there are at least some viewers uncomfortable with the storyline which has had Maya coming out as trans to Rick Forrester (Jacob Young) who she married last summer.

‘There people who are out there saying, “You’re putting this in our face too much,” he says.’But being able to be a trans actor playing a trans role has been phenomenal – particularly being able to play it in a story that was so well done.’

Schofield has long been an active spokesperson, speaker, and author for the transgender community. He has toured the world with such solo shows as Becoming a Man in 127 EASY Steps and Debutante Balls.

It’s when Schofield runs into other trans people and hears their reaction to the Bold and the Beautiful storyline that he knows any controversy or backlash it generates is well worth it.

‘A transgender woman of color stopped me outside of a clinic, she recognized me and said, “I’ve been watching your story line. It’s keeping me coming back here every day to get my treatments. It means so much to me and thank you so much for being a part of that.”

‘This is a woman who is experiencing poverty and all this tough stuff, she gets to see herself reflected in the glamour of a soap opera and that that really helps her through her day. Hearing that means everything and it doesn’t matter that there are some people who don’t want to see that kind of storyline.’

Such women like the one at the clinic are a world apart from Caitlyn Jenner whose transition has played out on the reality shows I Am Cait and Keeping Up With the Kardashians.

Schofield has not yet met Jenner but says: ‘I really admire her heart.’

Of Jenner’s critics he says: ‘Our community eats its own pretty badly. When I sat back and watched that show, she’s made no bones about the fact that she’s privileged. She’s honest about that. And yeah, she got schooled and she took that schooling with grace.

‘To watch her have those awkward conversations that I wish I could erase from my own memory much less do it in front of 17 million people. God bless her. If I met her, I’d tell her I think she does an amazing job and I hope it continues.’

Still, Schofield wonders if its completely healthy for Jenner to live all these changes out in the spotlight.

‘She hasn’t had a chance to be with herself. As a trans person, I know that you need the time to really be with yourself and experience. That’s like really deep stuff so I wish she could have some time without cameras.’