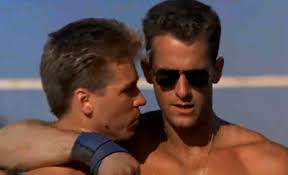 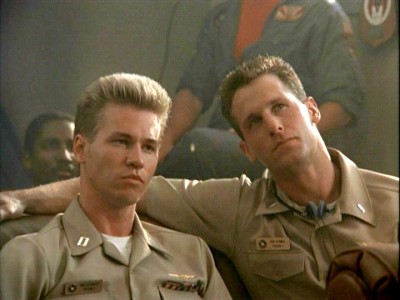 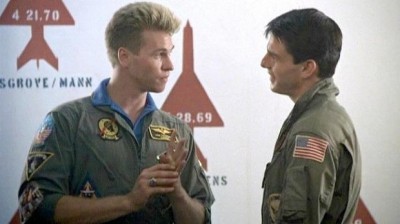 The Tom Cruise classic Top Gun will celebrate its 30th anniversary this summer so this is as good a time as any to watch it again.

You may watch it differently after reading this article and like the movie all the more.

He and his Radar Intercept Officer Nick ‘Goose’ Bradshaw (Anthony Edwards) are given the chance to train at the Navy’s Fighter Weapons School at Miramar in San Diego.

Maverick has a rivalry with LT Tom ‘Iceman’ Kazanski (Val Kilmer) and a romance with flight instructor Charlotte ‘Charlie’ Blackwood.

But Quentin Tarantino’s character of Sid in the 1994 film Sleep With Me has his own interpretation of the film that was a box office sensation and will reunite Cruise and Kilmer in an upcoming sequel.

Sid doesn’t once mentioned the film’s famously homoerotic beach volleyball scene in this brilliant analysis but still finds it plenty gay in it anyway.

‘It is a story about a man’s struggle with his own homosexuality. It is! That is what Top Gun is about, man,’ Sid says at a party in a movie-stealing cameo. 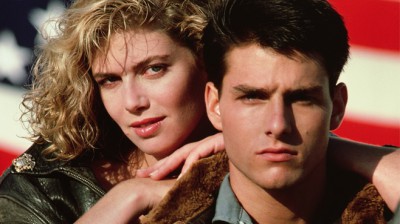 Sid is simply not buying the love story between Maverick and Charlie.

‘He goes to her house, all right? It looks like they’re going to have sex, you know, they’re just kind of sitting back, he’s takin’ a shower and everything. They don’t have sex. He gets on the motorcycle, drives away. She’s like, “What the fuck, what the fuck is going on here?”

‘Next scene, next scene you see her, she’s in the elevator, she is dressed like a guy. She’s got the cap on, she’s got the aviator glasses, she’s wearing the same jacket that the Iceman wears. She is, okay, this is how I gotta get this guy, this guy’s going towards the gay way, I gotta bring him back, I gotta bring him back from the gay way, so I’ll do that through subterfuge, I’m gonna dress like a man. All right? That is how she approaches it.’

‘And what is the last fucking line that they have together? They’re all hugging and kissing and happy with each other, and Ice comes up to Maverick, and he says, “Man, you can ride my tail, anytime!” And what does Maverick say? “You can ride mine!”

Ellen and RuPaul: Why we need to hold them accountable – and honor them