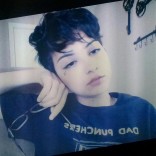 I was recently drunk at a club when a gay woman came up to me.

She told me that she thought I looked cool, and after a while asked for my number.

I could tell how drunk she was because she was slurring, and would repeat herself every few seconds.

But something she did made me very sad, as a gay woman.

This reminded me, again, of how afraid gay women are of expressing sexuality.

After every sentence, she would repeat over and over, ‘Please let me know if I’m bothering you or if you’re uncomfortable at all.’

Even after I had expressed interest through both body language and verbal agreement, she was afraid of coming off as a ‘creep.’ She admitted this later through text.

I assured her that I was gay, and interested. And yet she still could not help but believe in some way that addressing me sexually at all was inherently predatory.

The fear of being ‘rapey’

Looking back on my sexual interactions with other women, I’ve noted the very prevalent fear of being threatening. Or even ‘rapey.’

Once, my girlfriend and I, who I’d been seeing for months, could not perform sexually even though we both desperately wanted to. Both of us were terrified of overstepping the others’ boundaries.

We had to preface every step of taking our clothes off, kissing, inching towards each other, with ‘is this still okay?’ in a fearful tone because men in both of our pasts had failed to both ask and receive permission.

Many nights ended with both of us feeling defeat at the hands of our fear.

Of course, there’s nothing wrong with asking for consent.

But when I find myself unable to express my sexuality because I don’t want to emulate toxic masculinity, there is a problem.

And so many other gay women have expressed the same feelings.

I’ve felt my relationships with women become splintered and warped because fear of being ‘just another predator’ made us frozen and unable to perform at all.

Men throw harassment at women they’re interested in on the streets, in the clubs, and online. Meanwhile gay women are afraid to say hello for fear of overstepping boundaries.

And sadly this marks the existence of a huge wound surrounding women and how they relate to sex and consent.

If you want more information about rape, sexual assault or any of the issues in this article you may want to try some of these organizations:

Can I report a rape if I was high on drugs at the time?