Bond doesn’t blow smoke rings into Silva’s face in that scene but a faux poster created by an imaginative fan shows 007 doing just that.

In the film, Bond shares an erotically-charged scene with Silva who certainly seems to be gay – at least in that scene. Silva has had 007 tied up and as he confronts the sexy agent, he caresses Bond’s chest.

When he suggests this is the first time Bond has been handled in such a way by another man, Bond replies: ‘What makes you think this is my first time?’

At a press conference last month, Craig described the scene as ‘a great flirt.’

‘It the right thing to say, and that way that Javier plays it is so great. He plays it for real, and he plays it to the limit. He never forgets that he’s playing a Bond villain. I love that scene. It makes me laugh. I hope it makes you laugh.’

Bardem was asked at a separate press conference how Silva’s sexuality informed his portrayal.

‘It was part of the game, but it’s not entirely the game,’ he said. ‘You can read anything that you want or wish. But it was more about putting the other person in a very uncomfortable situation where even James Bond doesn’t know how to get out of it.’

Skyfall has been a blockbuster success at the box office earning $678 million worldwide so far. It is Craig’s third outing as Bond. 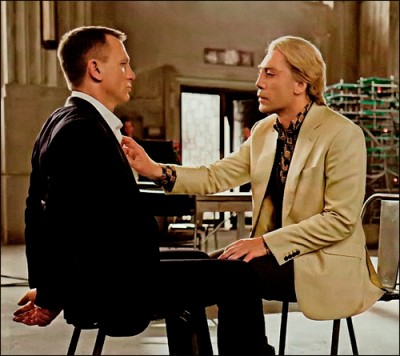