James Blunt was a surprise choice to headline the annual An Evening With Women event in Los Angeles alongside Macy Gray earlier this month benefiting the Los Angeles LGBT Center.

But it all made sense once Blunt shared with Gay Star News that the woman who co-chairs the event, music producer Linda Perry, is someone who has meant to the world to him – and to his career. 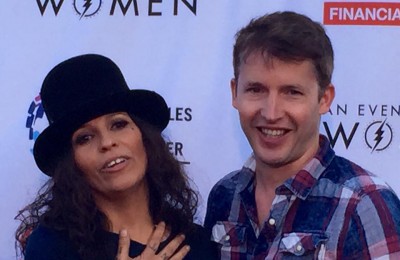 It was Perry (pictured left with Blunt) who gave an unknown Blunt a break when he needed it.

‘I’m a lucky man,’ he said before he performed signature hit You’re Beautiful and other songs for the crowd at The Hollywood Palladium.

‘She was the person who plucked me out of the UK and has given me a career. For me to come play here is an absolute pleasure and a huge honor.’

Perry, who is married to actress and talk show Sara Gilbert, was launching her own Custard Records label in early 2003 when she heard Blunt’s promotional tape while visiting London.

She was not among those who were put off by his posh speaking voice and made him an offer the night she heard Blunt perform at the South by Southwest Music Festival.

‘When I started out in the music business I was judged on certain things – my speaking voice and my accent,’ Blunt recalled.

‘I was asked if i could change my speaking voice and my accent and I struggled to get signed in the UK because of that accent. I moved to America and a woman who is gay herself and had seen much harder prejudice didn’t give stuff about a speaking voice. She heard music instead and said, “Come on.” She put her arms around me, signed me and has given me a chance.’

And it was a gay man, Elton John, who then signed Blunt to his management firm.

‘The people who picked me up and looked after me have been from the LGBT community,’ he said.

‘Really without them I wouldn’t be in the music business. If it’s a strange coincidence then it’s a coincidence I’ll take but I don’t think it is.’

Blunt, 42, has proven their instincts correct as he’s gone on to sell 20 million albums and 20 million singles worldwide, been nominated for five Grammy Awards and won two MTV Music Awards.

Before he launched a music career, Blunt spent six years serving in the British Army where he rose to the rank of captain.

His life experience has helped shape hos feelings about equality.

‘I think what I always try and sing about is what it is to be human,’ he said. ‘And for me really categorically I’ve always said I don’t care about the color of your skin, about your sex or your sexuality or about your race or your religion. Humans should look after each other and respect each other as equals.’

Of the LGBTI community in particular he said: ‘It’s a group of people who have to overcome a lot of prejudice, great adversity in different ways and they need support and need to support each other.’