Openly gay star John Barrowman can think of worse things that having to act in scenes on The CW series Arrow with hunky leading man Stephen Amell.

‘I’m required in my contract at some point, during the whole season, that Stephen be naked around me on camera,’ Barrowman jokes to The Backlot.com.

On the show the Torchwood star plays Malcolm Merlyn , the nemesis of Oliver Queen (Amell).

In an upcoming episode, Barrowman acts opposite a shirtless Amell whose character also happens to be tied up and helpless.

The actor then describes the filming of the scene: ‘He’s totally shirtless. I do this whole thing where I stalk him around him. It’s beautifully filmed. There’s a whole rotation with the cameras and then the other camera’s going in and out from both sides and then we have a crane that comes down and swoops up. It’s shot like a movie but I was talking to him the whole time. At one point, I get up to him, and I say some dialogue to him and he’s looking at me, and there’s this intense look and then I tweaked his nipple. I said, ‘You can’t do anything, can you?’ Then I went…[cups his hands as one would cup a crotch] and he went ‘No!!’ [laughs]’ 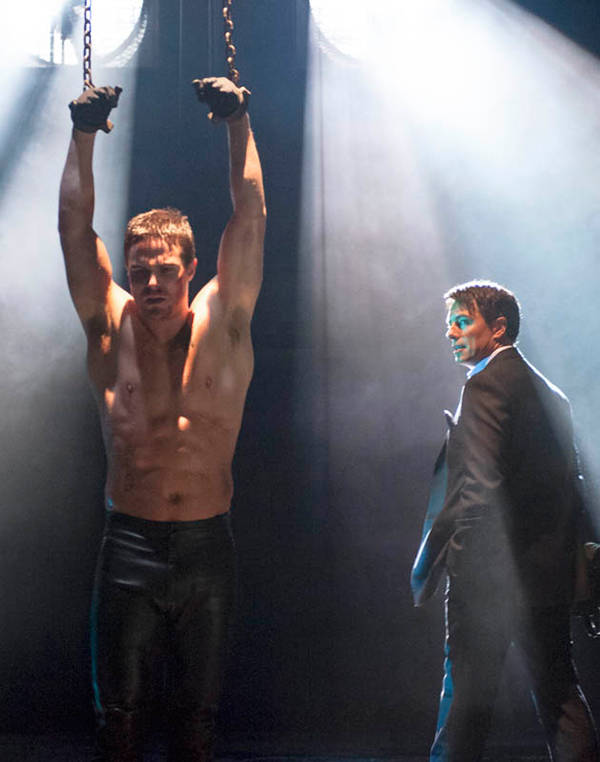 Arrow reveals another main character is LGBTI in the latest episode

John Barrowman wore a TARDIS dress at Comic Con, but its his message that counts