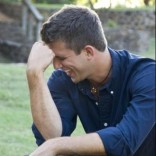 What is the real story behind today’s tabloid transphobic headlines?

I used to tell people I hoped I would die young. A part of me surely pictured a romantic tragedy to wrapping up my life before everyone else was ready to say goodbye. But mostly, I just couldn’t imagine the unbearable pain of growing old.

Friends would ask me how I pictured my life as an old man and if I trusted them I would tell them honestly: I couldn’t.

I hoped one day I would just grow terribly sick. Maybe a car accident. Dying while saving someone else’s life didn’t seem too bad. It didn’t really matter how.

I had moved beyond my brief flirtation with wanting to take my own life but I was never convinced the life I was left with was worth playing out.

That’s not entirely true, I suppose. There was one time I wanted to grow old.

‘They were best friends’

My freshmen year of high school, before my church or my sexuality would assert themselves as the roadblocks to proper society I would eventually have to come to terms with, I found what felt like some kind of future I could actually desire.

My geography teacher and the pitching coach on my baseball team was a man named Paul Mazzuca. He was loud and gregarious, prone to exaggerated songs to memorize the Bay of Biscay  –  it’s so fun, so fun to say!  – and long rants on the enduring perfection of the band U2.

With the classroom dark for a quiz he would not-so-subtly lean over to me, the clear map of Europe sliding off the projector as he whispered in my ear, ‘I’ll give you a hint  –  it starts with a “B” and ends with “-altic Sea.”’

But my favorite thing about Coach Mazzuca was his relationship with the teacher down the hall. They were best friends and gleefully blurred the line between personal and professional.

They would run into each others’ classrooms and interrupt the lecture to make fun of one another or tell a story about their kids. It was a massive high school, but in first period, we felt like a family.

Less than a month in I had decided I wanted to be a teacher too.

‘I only hoped death would take me before celibacy could’

Coach Mazzuca and his classroom stuck with me for years. I imagined myself with a best friend down the hall, laughing all day, sharing a ride home and discussing how the quiet girl by the window was finally coming out of her shell. She wouldn’t be one of my students, but I would know exactly who she was from her apprehensive responses to my own interruptions to their classroom.

With time my church and my sexuality did catch up with me and the dream of growing old as a teacher got pushed aside. From then on out I only hoped death would take me before celibacy could.

‘They had something I instinctively wanted: a partner’

It’s remarkable to me now how obvious it is that what I saw in Coach Mazzuca was not so much his teaching skills  –  though he was a natural  – but his companionship down the hall.

Make no mistake, they were both happily heterosexual. But they had something I instinctively wanted: a partner. It was a deeply freshmen understanding of what the profession would be, but for some 30 years, it was the only time I imagined myself having a life worth seeing out to the end.

I did become a teacher after graduating college, though I never found someone I could share the years with like I imagined I would.

I taught and coached baseball just like Coach did, but my students never saw anyone burst through the door with another gut-busting story or sarcastic observation on my teaching skills.

They never caught a glimpse of me as more than just a man alone in his classroom, never felt the family I was so enamored with in the hall when I was their age. I sure didn’t see it this time sitting on the other side of the desk.

After two years I moved on. It wasn’t enough for me to imagine a life beyond my 30s. I saw it as a beautiful job, but a life I wouldn’t be able to sustain. Alone it seemed so much different. And compounding the pain was knowing I couldn’t tell anyone why I had no one to share it with down the hall.

Celibacy and the closet

It’s hard to know exactly what to say to someone when you think their sexuality is busted enough to require celibacy. Family and priests who knew I was gay would always mention how deeply private they understood it was. Nobody’s business but mine.

Unseemly coming out videos or gays who ‘flaunted it’ around the office taking a small piece of themselves and masquerading as if it were the whole. The recognition that this was mine to reveal was also wrapped in the unspoken hint that it would be so much better if I never did.

Maybe it was embarrassing. Maybe it was understood that bigotry was out there and real and a kind of pain better to be avoided if possible.

The sincerity of this instinct to closet I know came most truly from a place of wanting to protect and shelter me more than hide and neglect. But what type of life can you envision for yourself if you must disguise it from the world?

‘The hiding, the waiting, the lying — it left me praying for an early grave’

While those around me celebrated anniversaries and children and stories of dates gone desperately awry and delightfully well, I was left to wonder why my life wasn’t worth sharing at all. Not like theirs.

Eventually I was left with the option to either believe I would never — could never — have a partner down the hall to share life with, or to give it a shot myself, to date, to fall in love, to try and see if it measured up to what everyone else had.

Maybe it would come out as disordered and abominable as so many told me it would. Or maybe not. But at least I would know. Because the hiding, the waiting, the lying — it left me praying for an early grave.

‘Falling in love is the farthest thing from a misdeed’

Even as I said the words out loud I knew how wrong that was. If anyone I loved ever said that to me I would wrap them up in my arms so close and tell them they can’t go on like this. It took years for me to finally say it to myself.

What I know now is that my instincts were right. Whether or not I end up back in the classroom one day, the example Coach Mazzuca inspired in me was a genuine one. A partner is no scandal. To share your life is no crime. Falling in love is the farthest thing from a misdeed.

The hope two teachers gave me over 15 years ago took a while to bloom. It hid underground and grew stubbornly in fits and starts. Sometimes, though, I catch that same look Coach used to have in my boyfriend’s eye. And when I do, I know I’ve made it.