An arrest has been made in the attack on gay activist George Zander and his husband that police in Palm Springs believe was a hate crime.

Zander, 71, is well-known in the desert city as one of the founding members of the Desert Stonewall Democrats and currently sits on the Palm Springs Police Department Advisory Board.

He and husband Chris Zander were attacked on 1 November after leaving a nightclub in the heart of the town’s gay business district. 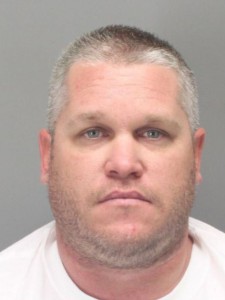 Terranova is being held at the Larry D. Smith Correctional Facility in Banning on suspicion of the felony crimes of elder abuse, battery with serious injury, assault with a deadly weapon, and committing a hate crime.

Police, who are still looking for a second male suspect, believe Terranova had a verbal confrontation then a brief physical altercation with the couple as they walked past each other on South Calle Encilia, between Arenas Road and Tahquitz Canyon Way.

Within minutes, police believe Terranova in a returned in with another man and the pair attacked the couple at the southwest corner of Tahquitz Canyon Way and South Calle Encilia while hurling anti-gay slurs.

Chris Zander said in a Facebook post this week that his husband had walked 40 feet and was able to sit up for almost 90 minutes which he described as a ;huge step towards recovery.’

‘He begins to cry in happiness when he begins talking about the support, the good energy, and the love that our community and our family has provided to us,’ he wrote. ‘The love that this community provides has a tremendous and powerful impact on the determination and strength used to fuel George on his continuous path to a speedy and smooth rehabilitation.’