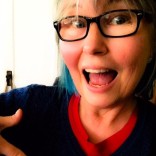 I met my husband Jim over thirty-five years ago.

I had been out as bisexual for nearly 10 years when we met.

Before we dated, I had been in a relationship with a woman. We were together for almost two years.

The deal breaker for her was the fact I was bisexual.

I made the mistake of not stating it plainly when we met. I was naive and felt certain my attraction to multiple genders was obvious. Evidently, it was not.

I was not going to make the same error of judgment with Jim.

I never did hide my bisexuality from him and I felt no compunction to be monogamous in our relationship.

He was accepting and supportive. I found his attitude affirming and refreshing given the rampant biphobia of the time.

One thing led to another and we were married.

I did not think I was a person well-suited for a long-term relationship or for monogamy three decades ago.

Nor did I have expectations of longevity at the beginning.  We did know we would treat each other with respect and be honest.

A simple formula but it has worked.

I don’t believe any marriage is perfect or blissful all the time but at the end of the day he is the person I want to come home to.

I am well-versed in the common mythology about bisexuals.

We are greedy, as well as being unable to commit. We must have concurrent sexual relationships with multiple genders.

I don’t want to sugar-coat reality. There are definitely challenges to maintaining a long-term relationship when your sexual orientation is bisexual.

We will have sex with ‘anything that moves’. We are in a phase and our bisexuality is just a stop on the way to gay (or straight).

Most of these challenges are external and layered upon bisexuals by society.

The bi-erasure is difficult to deal with.

I have lost count of the number of times I have come out to a friend only to have them tell me I am married. As though my marital status was something I was not keenly aware of.

I tell new people I meet I am bi but I don’t share the ‘secret’ with the most important person in my life.

It is always as ludicrous as it sounds.

The seeming suggestion is my marriage somehow changed my most fundamental identity.

Given the biphobia the bisexual community is subjected to coming out is not something any bisexual does lightly and it is not without peril.

It is a bedrock aspect of my being and I am as bisexual today as I have always been. I still find humans of all gender identities attractive and know I have the capability to be sexually or romantically engaged with them.

Bisexuality is not a phase.

‘Straight-passing privilege’ does not exist because it is never a privilege to be seen as something other than your authentic self.

In fact, the erasure and assumptions are burdensome.

This is the case for bisexuals whether they have a long-term relationship with someone of their own or another gender.

Bisexuals should never have their sexual orientation judged based upon who their partner happens to be because it does not work like that for us.

There were no specific organizations who supported bisexuals when I was younger.

Bi-representation in media was virtually non-existent. I had few role models to look to for direction on how to navigate the world as an out bisexual.

While there have been positive changes over the decades I find it disheartening to know young bisexual people still cope with many of the same biphobic slurs and stereotypes I did.

It was hard enough to walk through that world alone. I am glad I found a partner who accepted me as I am to share the journey.

Our story is far from over. We have a few more chapters to write.

Bisexuals can have long-term, fulfilling relationships despite the distorted way we are sometimes portrayed in society.

Every bisexual is valid and worthy and more than capable of deciding what their future holds. Just as I did more than three decades ago.

Read the Bi+ Manifesto below