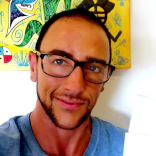 I grew up in the 80s on a small Mediterranean Island as the lone child of a secular and rather dispersed Jewish family of mixed ethnic heritage.

I didn’t know much about being queer.

I didn’t know it was possible to be Jewish and LGBTI. In fact, I didn’t know much of anything past the infamous pink triangle gay men were forced to wear in Nazi Germany. My grandpa was a concentration camp survivor and he would often tell me about the horrors he witnessed.

We moved to a bigger city in my teens, and I eventually came out as gay.

But even then I couldn’t quite shake off that uncomfortable feeling, the way my identity felt somewhat mismatched. I couldn’t quite define it. And we didn’t have the ‘T’ word then, so it took me almost 20 years to discover the concept of female-to-male transitioning.

Coming out as trans later in life was a hard, but it was a great relief. I haven’t looked back. But, then, I benefit from privilege. I’m part of the Progressive Jewish Movement. I’m based in London, and I work for Liberal Judaism – a trailblazing faith-based charity that proudly hosts my LGBTQI and faith projects.

Last night, a milestone exhibition in Jewish history in Britain opened at the Jewish Museum London: Through a Queer Lens – Portraits of LGBTQ Jews In Britain.

It has been inspired by the landmark project Rainbow Jews, which I founded in 2012 with a grant from the Lottery Heritage Fund. It’s the first collection of Jewish LGBT History in the UK, and we indeed made history.

The 20 portraits by fine art photographer Ajamu reflect the Rainbow Jews narrative – a long and sometimes arduous journey the Jewish LGBTI community has been on: In the course of my adult lifetime, LGBTI Jewish identity has been transformed from something without even a name to something we celebrate.

Progressive Judaism has long welcomed LGBTI people into its communities and we have openly LGBTI rabbis and leaders. Same-sex marriages have been celebrated in our synagogues since the UK’s Marriage Act came finally into action in March 2014. We pioneered same-sex blessings before that.

Now the world has caught up. In the past year, backed by a global media frenzy and those activists creating greater awareness by tackling equalities head-on, transgender people have moved from the twilight into the spotlight.

Amazon series Transparent has received multiple awards for their portrayal of a Jewish family man coming out as a woman, named Maura Pfefferman.

Britain’s Liberal Jewish community has seen a surge in transgender coming out stories of late. Liberal Judaism, its rabbis and communities are also working hard on those practical life-cycle issues around being transgender – name-changes, wedding ceremonies.

And just last week, Liberal Judaism’s Lottery-funded project Twilight People: Stories of Faith and Gender Beyond the Binary launched its landmark exhibition on trans and faith identities for LGBT History Month 2016 with fanfare.

Capturing the voices and images of more than 40 trans people from different faith backgrounds, the collection of photographs, recordings and artifacts exploring this ‘hidden history’ are on display at Islington Museum in London until 5 March.

It’s another important landmark, and one I am incredibly proud to have been part of.

I am someone with first hand experience of the difficulties transgender people of faith have to deal with. Despite our increased visibility, and the great work we’ve done in Liberal Judaism, I still don’t always feel understood and included in community life.

My own coming out experience has been replete with unspoken questions and awkward encounters, stemming surely from a lack of visibility.

More traditional strands of Judaism have also struggled with Orthodox Jews on the whole the worst off worldwide.

Gay Orthodox Jews face tremendous pressures to deny or hide their sexuality, and often they are forced by their own families into so-called ‘conversion therapies’ which are extremely dangerous and have been known to lead to self-harm, depression and even suicide.

But there are already some groundbreaking initiatives that will drive change for Orthodox LGBTI Jews.

For instance in December 2014, dozens of lesbian, gay, bisexual and transgender religious Jews revealed their identities and sexual orientation online, publishing their names and photos in a first-of-its kind campaign. Titled Our Faces, the campaign is the work of a collective of religious queer organization in Israel. The ripple effect has already begun.

More than ever, it’s time for the LGBTI community across the globe, from all faiths and denominations to work together. As it says in the Torah, (the first five books of the Jewish bible): We are one – b’tzelem Elohim.

Surat-Shaan Knan works for the Liberal Jewish movement UK and is a campaigner for faith related LGBTI issues. Shaan is the founder and manager of the landmark Lottery Heritage funded projects Rainbow Jews and Twilight People. He has also co-organized Through a Queer Lens and Ritual Reconstructed, Shaan is on the Stonewall Trans Advisory Group.