Could Sam Smith be singing next Bond theme after all? 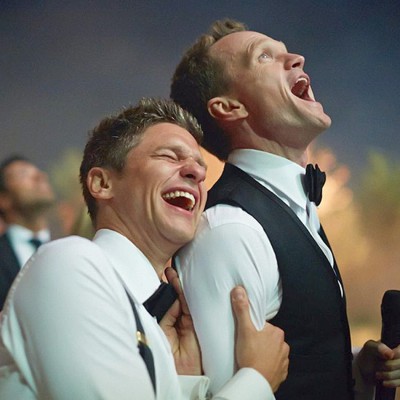 After a decade as a couple and the birth of two children, Neil Patrick Harris and David Burtka made things official with a lavish destination wedding in Italy a year ago.

Harris took to social media on Sunday (6 September) to wish a happy anniversary to his beloved: ‘One year ago today I had the pleasure of marrying David Burtka. I’m so happy that I did – he’s a truly wonderful man. Here’s to many more laughs and adventures..!’

Harris has previously made clear how much Burtka’s support has meant to him. When he accepted the Drama Desk Award for his acclaimed performance in the musical Hedwig and the Angry Inch last year, he thanked Burtka for his sacrifices during the long run of Harris’ CBS sitcom How I Met Your Mother.

‘We’ve been together for over ten years and when we first met I was doing a show, Cabaret, and he was Tulsa in Gypsy,’ he said. ‘We were both doing shows at the same time and my path has led us mostly to Los Angeles and it has sort of uprooted him from what he had been doing. So, thank you so much for your love and for your patience and your sacrifice in all that you do. And I can’t wait for the opportunity soon when these roles get to be reversed and I get to cheer you on up here doing what you do so well.’

He directed Burtka in a cabaret show at New York City’s 54 Below last November then in March, Burtka returned to the Broadway stage as one of the leads in It Shoulda Been You.