Next to a photo of an unidentified man wearing pink flowery socks, Smith wrote: ‘Look at this queen.’

Smith took to Twitter to respond to the photo first being reported by TMZ.com.

‘The things these gossip sites do to get attention smh,’ he tweeted. ‘I wasn’t being offensive nor am I homophobic not apologizing or taking it down.’

Smith, 24, was drafted by the Ravens in 2011. He has enjoyed one of his best seasons reaching the 1,000 yard receiving season mark for the first time.

The post comes at a time when the NFL is dealing with the perception of widespread homophobia within the league among players and coaches. The league has never had a player come out as gay during his career.

On Thursday (2 January), former NFL player Chris Kluwe alleged that he was fired from the Minnesota Vikings because of his outspoken support of LGBTI equality. 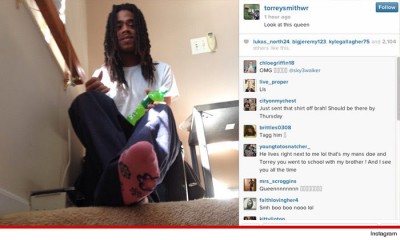 Ricky Martin reacts to Puerto Rico governor’s resignation: ‘We did it’