MSNBC anchor Rachel Maddow, the first out lesbian to host an national evening news show, is well aware she lacks the glamour of such female newswomen as ABC’s Diane Sawyer and Fox’s Megyn Kelly.

‘All those blondes on Fox,’ she tells Playboy in its first non-nude issue.

‘I mean, if I worked at a place where they did not allow you to wear sleeves, could you imagine? Or where all desks had Lucite bottoms so you could show your shins. Jesus, I feel very lucky that at MSNBC they’re like, “You’re fine in the $19 blazer.”’

Maddow, 42, did have long blonde hair in high school. But once she cut it short and let it go dark, it has remained and she has stood apart from most of the other female anchors on major news shows. 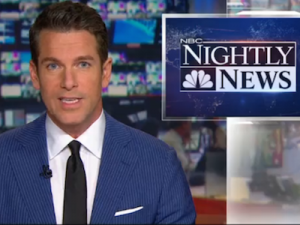 ‘It is weird to be in an industry where everybody is so good-looking,’ she says. ‘I do not think of myself as a physically attractive person. I think of myself as a goober. I dress like an eight-year-old with a credit card, and I eat like that too—burritos or pizza or s’mores. That’s it. But these ostentatiously attractive people! Thomas Roberts (pictured, left) on MSNBC is a golden god.’

Roberts is also openly gay and hosts his own daily program on MSNBC.

Maddow came out publicly during while attending Stanford University and she did so quite boldly.

‘I put up a public letter in the stalls in my dorm,’ she says. ‘I was a freshman and very cocky and had incredible self-regard, as all good 17-year-olds do. I hadn’t known I was gay for a long time. I was just figuring it out. There were very few openly lesbian students. Once I was sure, I quickly realized that I did not want to be a closeted person—that that was a weak place to be.