Headliner LeAnn Rimes was sidelined by the flu but Lily Tomlin, Pauley Perrette, Dot Jones, Dave Koz, Jai Rodriguez and Greg Louganis were among the stars on hand over the weekend for the Los Angeles kickoff of a nationwide tour of the musical It Gets Better.

The show, inspired by the It Gets Better anti-bullying campaign, features an ensemble cast of six actors – members of the Gay Mens Chorus of Los Angeles – whose real-life stories of growing up gay are woven into the production.

It Gets Better founders Dan Savage and Terry Miller were in the audience for the Los Angeles performance at the Wilshire Ebell Theatre. Future stops include Lawrence, Kansas; Seattle, Washington; and Penn State in University Park, Pennsylvania.

Gay Star News chatted with several of the celebrities before the show about the bullying epidemic that has led to far too many LGBT youths to committing or attempting suicide.

‘The most important part about the It Gets Better campaign is to be able to reach out through social media,’ says Perrette, the popular star of the CBS series NCIS. ‘These kids that don’t have a supportive community that we might have here in Hollywood that we might have in the entertainment industry.’

Perrette participated in the Los Angeles show and is a straight ally who has raised money for gay marriage causes and AIDS Project Los Angeles and spoken out about bullying.

‘When you’re young, it’s so hard to be sitting in your circumstances that you’re in right then and to picture a future that isn’t as painful,’ she says. ‘It’s tough being a kid anyway and if you’re being bullied and you’re being treated badly, you feel like the rest of your life is going to be like this. But my goodness, get yourself through high school.’ 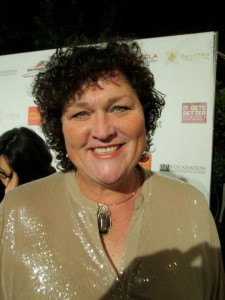 Jones, who plays Coach Beastie on Glee, says she was bullied when she was younger because she stood 6 feet, 4 inches and weighed 250 pounds. But she persevered and used her size to become a champion in the shotput qualifying for the Olympic Trials and later becoming a 15-time world arm wrestling champion.

‘Fortunately there’s a lot being done but unfortunately, there’s still stuff that’s getting through the cracks and it breaks my heart,’ she said of the bullying problem. ‘Nobody deserves to be bullied.’ 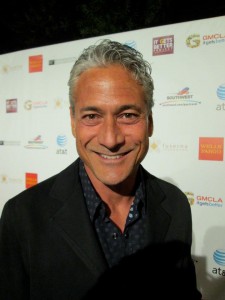 Olympic diving legend Louganis, winner of four gold medals, suffered through depression as a kid in high school despite his athletic prowess.

‘When they say it gets better, it really does,’ said the openly gay Louganis. ‘Where I am today and where I was then. It’s been amazing. I went to my 30 year (high school) reunion and it was an amazing experience just to go back and visit that because my memories were pretty dark. They were reminding me of some of the incredible things that happened – I was Olympic silver medalist in high school.’

Louganis, who went on to win two gold medals in both the 1984 and 1988 Olympics, was deeply disappointed by not winning gold at the 1976 Olympics in Montreal.

‘I went there to win, I didn’t go to take second,’ he recalled.

Louganis recently wrote a letter to his 16 year old self stating: ‘You will hold that medal with pride. It’ll take many, many years but you will.’