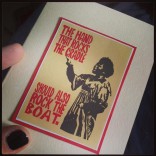 New York’s City’s Greenwich Village in the 1960s was a buzzing bohemia. Home to avant-garde cabaret and off-off-Broadway scenes, artists hangouts and the progressive political thinkers and organisers of the anti-war movement, it seemed to embody the rejection of cozy, middle class conservative values.

Little surprise then, that in 1967 organised crime family the Genoveses decided to open a gay bar there. The Stonewall Inn, situated in on Christopher Street and close to the heart of Greenwich Village, was the spot.

It seems unlikely, the partnership between the gay community and organised crime. However, the story was retold in bars all over New York.

It was a mutually beneficial arrangement: in exchange for putting their money over the bar, the Genovese family bribed the NYPD to the tune of $1,200 a month to stay away and let queer patrons drink in peace.

Drinks were watered down, severely marked up served in dirty glasses. Indeed, the Stonewall was blamed for an outbreak of hepatitis – and richer, closeted patrons blackmailed over their sexuality.

Nevertheless, it was worth it. To drink in relative safety, to have a space to meet like-minded individuals, to conduct torrid affaires du coeur or just du night safe in the knowledge that they’d be tipped off should police be about to raid. It should have been a safe space.

Most of us know what happened on that night in 1969. Tension between The Stonewall’s patrons and raiding police erupted into violence, a spontaneous rebellion against oppression. The most marginalised are thought to have led the rioting: sex workers and the street homeless, people of colour and butch lesbians.

Things have come a long way since then, apparently. We no longer fear police brutality, in the main, for simply being who we are. We are liberated, aren’t we?

It would be churlish and hyperbolic of me to suggest queer people in cities like London, where I live, have cause to fear the same things that our forbears did. By comparison we are lucky.

We have won the right to marry our same-gender partners. We still fear hate crime, but we are fairly certain that hate crimes against us will be treated seriously. We’re unlikely to be extorted (even if the drinks are sometimes still watered down). But bars, cafes and clubs are still not safe.

Biphobia is rampant in the queer community. So is transphobia. So are ableism and racism.

We may no longer fear police brutality (at least if we are cisgender and white) but that is a low bar to set. Instead, we fear each other. We have fought so hard to protect ourselves from the hate of outsiders but forgotten about the beast within.

When it comes to LGBTQ clubs, pubs and bars bisexual people, and bi women in particular, report feeling unwelcome at best and fearing violence at worse.

Their fears are not unfounded: an anonymous bi woman living in West Yorkshire told me that she was physically attacked and called a tourist by a drunk woman in a club. Several more told me they were sexually assaulted.

And that’s only when we can get in through the door: as of 2017 there were no fully accessible queer venues in the whole of central London.

Trans people too have legitimate reason to fear the bar scene. With anti-trans activists, increasingly legitimized by a morally redundant mainstream press, and active in our community spaces, nowhere is truly safe.

One trans friend of mine reported being groped, another having slurs shouted at her. Still others tell stories of simply being denied entry.

‘Our safe spaces are not safe’

Things are getting worse for all of us. Homophobic, biphobic and transphobic abuse is on the rise,  but instead of standing together in the face of hate we have split: assimilationists versus liberationists, inclusionists versus exclusionists, those who think bi and trans people belong in the community, and those who virulently do not. Our safe spaces are not safe. We have made them so.

It is time to show prejudice the door. Our community that has long been judged by people who think they understand our genders and sexualities better than us. There is no reason for us to do the same to one another.

Libby (@monstrousfemme) is a Stonewall Rolemodel and director of Biscuit (@we_are_biscuit), the organisation for anyone at the intersection of biphobia and misogyny. She’s been involved in bi plus activism for 15 years, and last year she brought the first ever bisexual pride float to Pride in London.

Libby is co-promoter of Bijou, London’s only bisexual club night, taking place at The Apple Tree, Farringdon on 29 June 2019.