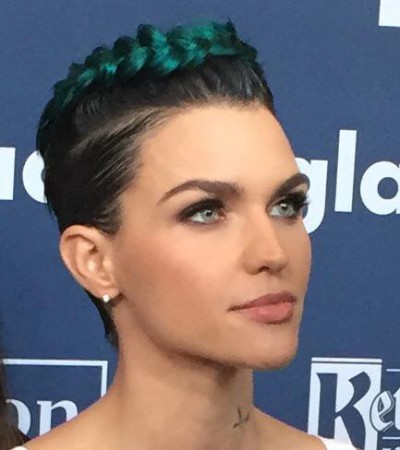 It was the night’s best kept secret.

Then came the unannounced appearance of 10-time Grammy winner Taylor Swift who showed up to present the Stephen F. Kolzak Award to Orange is the New Black star Ruby Rose.

‘Ruby breaks down barriers and opens up opportunities for all people but, most importantly, young LGBT people across the world.’

Rose, who was surprised and emotional that Swift presented the award to her, told the audience of the rough time she had growing up.

She was verbally abused, ‘beaten until I was hospitalized,’ and attempted suicide ‘many times.’

‘I felt like there was so much wrong with me – so much weird,’ Rose said. ‘I had no idea how I dreamed so big when I felt so small but I know it got me through each day.’

She talked about how her ‘whole life lit up’ when she saw a lesbian character on a long ago nighttime soap opera then how the Showtime series The L Word ‘was my first religious experience.’

“That show probably literally saved me life … I felt like I existed.’ rose considers herself ‘blessed’ to have benefited so much from a television show and to have experienced both sides of the journey by now appearing on a show with so much LGBTI representation.

‘I truly understand how important it is that we are not invisible.’