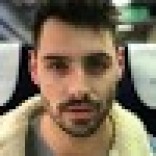 There are four of us in the band; myself, my husband Sam Netterfield, Zoe Davis and Dan Puusaari.

We’ve all known each other since we were in school and it feels like we’ve grown up together.

Sam, Zoe and I all identify as queer. Being open and proud of that has become a big part of the culture that surrounds Cub Sport.

The journey of self-acceptance and self-love has largely inspired our discography, with each album marking a different point along the way.

I grew up in a pretty religious environment. Went to church every Sunday, and to a Christian school.

So basically everyone I came into contact with held the same beliefs and values. I barely even knew queer people existed. Whenever I heard anything about someone being gay it was generally painting them in a negative light.

You can probably imagine how horrified I was when I started to realize I was attracted to boys. I actually formed a pretty big crush on Sam when I was in year 11. That was kind of the start of an ongoing internal battle.

‘We fell in love quickly’

I wanted to be able to act on how I felt but didn’t want to embarrass myself or my family. So I kept quiet. In fact, I have vague memories of trying to ‘throw people off the scent’ by joining in when people were being homophobic.

When I graduated from high school, Sam and I started hanging out every day. That was the start of my first romantic relationship. It was truly amazing. I’d never felt more like ‘me.’

We fell in love quickly. But we kept the whole thing to ourselves, ‘cause I felt like I would lose everyone and everything in my life if they knew.

We tried to break it off. I had a shot at dating a girl who I genuinely loved but was really just as a best friend. So that ended pretty quickly.

Sam and I did well at ‘just being friends’ for years. And the internal battle raged on inside me. Looking back I can see the way my shame and self-loathing expressed itself in health issues and an inability to express kindness and love to anyone else.

I was writing songs throughout this whole time. While some of the songs connected with people in some way, I could feel that what I was creating didn’t feel like it was actually telling my story. I felt some sort of disconnect.

‘I went on a month-long writing trip to LA’

Throughout 2013-2014 I was writing songs for our debut album. I wrote a song that felt transcendent and I felt really connected to it, even though I wouldn’t admit to myself why. The song is called Come On Mess Me Up.

It has a line in it that goes ‘I fell in love with avoiding problems and that was the problem.’ It basically sums up where I was at in my life. Always avoiding anything I saw as a problem. Like my sexuality and the fact that I was in love with Sam.

I went on a month-long writing trip to LA and London in the middle of 2015. And although Sam and I hadn’t been ‘together’ for years, we’d still spent every single day together and we’d moved into a shared house with one of our best friends.

I couldn’t believe how much I missed Sam while I was away. It really started to dawn on me how deep our connection was. It was kind of terrifying. I still held all those same fears of disappointing my family. I had so much internalised homophobia that I hated to think of myself as a gay man, and decided to still keep it to myself.

When I got home from that trip I was writing a bunch of songs, a lot of which would end up being on our second album BATS. One of the songs I wrote during that time is called ‘Chasin’’

Is it hard to see me go?

‘Cause I miss you when I’m gone

Is it worth feeling alone for so long?’

Sam and I would never speak about our past or our future. We’d just spend everyday together grateful that we could be best friends but both secretly wishing it was so much more.

Thankfully, there was inspiration flowing through me and the songs I was writing started to let Sam know how I was feeling. Even if I wouldn’t say it out loud with my words.

Our debut album This Is Our Vice came out at the start of 2016. We toured the UK and North America throughout May and June that year.

Sam was reading a book called A Little Life and saw parts of our story in the characters in the book. It set a burning urgency in him to let me know he was in love with me.

We were in the US for all of June which is Pride month. It was also during that time that the devastating homophobic attack in Orlando happened. I remember reading a post Ed Droste put up about coming out and representing the queer community and feeling a call to start being my true self.

We played the final show of that tour in Vancouver on 30 June and spent the next day celebrating.

On the night of 1 July , Sam said something along the lines of ‘I don’t want this to ruin our friendship but I’m in love with you and I want to be with you.’

I cried and told him I wanted the same thing. There’s a song about that night on our second album BATS, called Crush.

We flew back home to Australia the next day and both came out to our families that week. They took it really well. Everything felt pretty normal within a week or so. We let the news trickle out gradually through friends and our social media.

‘I do deserve love and happiness’

I wrote a lot of songs just after we came out and got together. A lot of which ended up completing our second album BATS which came out in the back half of 2017.

That album feels like it represents self-acceptance and coming to a place of realizing that I do deserve love and happiness. It will always be such a special album for me, marking such a huge turning point in our lives.

Years of shame takes a toll on you emotionally, physically and spiritually. But I feel like I’m always growing stronger and wiser, retraining my subconscious, making positive thought patterns my default, taking back my power and noticing when I’m letting fear take over.

All of those experiences and themes inspired our third self-titled album which came out earlier this year.

I see that album as a move from self-acceptance to self-love, which feels amazing. But I know I have further to go.

It would be nice if it was as simple as coming out and instantly being released from all shame and fear. But it’s a journey. I’m unwinding myself and unlearning things that held me back. The opening track on our self-titled album is about that process.

‘I’m so proud to say that I do love myself’

Being on this journey with my amazing husband Sam and with the support of our beautiful fans has been really special. I get messages every day from people saying we’ve inspired them to embrace their truth and be proud of who they are. And I really couldn’t ask for more than that.

I’ve come to the realization that you never stop changing. Never stop learning. Our existence and the world we live in is so much greater than I ever understood when I was growing up.

I feel like this journey of understanding and loving myself and those around me is exciting. It’s filled with highs and lows and countless lessons that aren’t always easy to learn. I’m so proud to say that I do love myself, I LOVE that I’m queer and I love being part of such a beautiful, powerful and loving community.