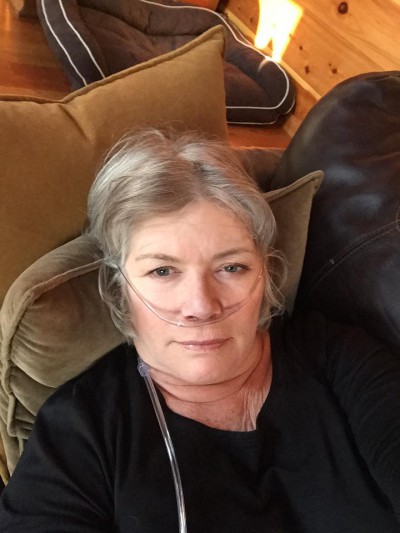 Out actress Kelly McGillis is sharing the details of a terrifying recent home invasion that left her injured and resulted in her getting a permit to carry a gun.

‘I’m still a bit shook up and struggling with some residual fear,’ McGillis wrote in one of several Facebook posts.

Best known for her leading roles in the films The Accused, Top Gun and Witness, McGillis posted a photo of herself on Facebook with an oxygen tube which she said is due to her high anxiety levels.

McGillis had left her mountain home in North Carolina without setting her alarm.

A woman, accompanied by a young daughter, broke in through a garage window and threw dog food all over the kitchen floor to distract her three dogs.

When McGillis arrived back home, she discovered the intruders.

The actress writes: ‘… A woman came barreling down the hallway and began yelling at me. I asked her who she is and why she was in my house and she said “You know why you’ve been stalking me in Twitter.” Not true.

‘At that moment I got worried that there may be someone else in the house with house with her. We have quite a few guns and lots of ammo and that’s when I started to panic. Thinking that if they have one of them I could be shot. I ran out the front door and called 911.’

The intuder ran out after McGillis and began punching and scratching her while trying to grab the phone out of her hand.

‘I began screaming as loud as I could hoping someone somewhere might hear me. I still had my car keys in my hand so I set off the car alarm. That distracted her enough to throw the cell and try to deal with the keys. More fighting ensued. I got the cell phone back and dialed 911 again. More fighting. And she once again had the cell phone.’

McGillis was finally able to break away, get in the truck and drive off in search of a neighbor to call 911.

‘There was no one around since it was Friday night, so I chased someone in a car, kept flashing my lights and honking the horn. They finally pulled over and she made the 911 call for me. A truly good Samaritan. Dispatch told me to wait there for there for someone to arrive.’

The intruder was caught by police.

‘I’m alright. Scratched and bruised,’ McGillis writes. ‘I feel very thankful it turned out well. But who I feel heartache for is the little girl that was with her. Mental illness takes many hostages. I don’t know her name…but I would like to asked that you pray for her and her mother.’