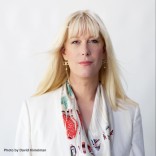 So this morning I was at the hair salon when this lady who is probably in her 70s and seems very nice mentions that we’ve been here on the same day several times now and asks me my name.

I tell her it’s Viv, then my hairdresser who insists on calling me Justin for some reason, even though I always pay him in cash in an envelope that says, “🖤Viv” walks up and calls me Justin.

After he walks away she looks confused, leans in and asks if she can ask me a question. I hesitate ever so slightly because I know it’s going to require patience on my part because, no matter what I say, I know that eventually I’ll feel bad if I get snarky.

‘Well, I know you’re a man and he just called you Justin but you told me your name is Viv.’

‘Yes, he insists on calling me Justin but I go by Viv. My name is Justin Vivian Bond.’

‘Well I’ve seen you in here several times now and I’m just wondering if this is how you usually dress in your daily life or if it’s some kind of performance.’

Before answering I take a breath, ‘Actually I’m not a man, I’m transgender and this is just how I dress.’ (I’m wearing black silk pants and a matching black silk top with white suede adidas sneakers, btw)

‘I take estrogen but that doesn’t effect my voice so this is the way I sound. It’s my natural voice,’ I tell her truthfully.

‘Unfortunately, estrogen doesn’t make you shrink either. Once you’re grown you can’t ungrow.’

I’m being very patient now because I can tell she’s not being mean but is just sincerely ignorant and curious.

‘Does this make it difficult for you at work?’

I explain that more and more people are transitioning and so it’s getting easier but that yes a lot of people do experience discrimination in the workplace.

I tell her that I’m an artist so I’m fortunate that I don’t usually have to deal with that as I make my living doing whatever I want and I don’t have to answer to an employer.

Then I explain that times are different now than even when I was a kid.

I tell her that when I was growing up they used to describe transsexuals as women trapped in a man’s body to make it easier for people to understand but that now it’s different, that generations who are younger than me find it much easier to understand that there are all kinds of ways of being and of expressing your gender identity and that it no longer needs to be either/or.

She’s nodding as if she understands.

So bringing it back to my deep voice and my height, I tell her that I’m not a man but I’m realistic and that I don’t have the desire or energy to put the pressure on myself to pass as, or convince anybody that I’m a woman -and that I’m fine with that.

I tell her that I feel fine just the way I am so I don’t usually bother correcting other people’s misconceptions because I find it tiresome. People see what they see and you can’t control that.

She seems genuinely grateful and thanks me. She tells me she doesn’t want to take up any more of my time but she really appreciates me answering her questions. Later, before she leaves she thanks me again and tells me I’m a ‘fine person.’

‘She opened a can of worms’

On the train afterwards as I’m heading downtown I feel tired and sad and old. Exhausted. I know I’ve done something nice but I kind of resent it. I am, as they say triggered.

As I walk in, my left hip is killing me, I’m in heels and I’m feeling a bit nihilistic. There are a lot of people in wheelchairs but there’s no seating provided for anyone else.

I turn to my date with my opening gambit, ‘Who do I have blow to get a wheelchair around here?’

Sometimes it feels good to be terrible too.

Now I’m lying in bed not able to sleep. It was a great event and I met some wonderful people who also know what it’s like to be constantly stared at and questioned. I know I’m not alone and that I’m not the only person who struggles with these things.

But I keep going back to that lady. She opened a can of worms. I’m thinking about how nice I was. I’m thinking how I’ve struggled since my father died to have positive memories of him even though the last time I saw him alive he threw me out of the house because I’m trans. He did so many wonderful things for me in my life but they don’t change the fact this his final act was so cruel.

I’m thinking of the boyfriend who said to me, ‘You’re just a fag on E.’

I’m amazed by all that I’ve risen above in my life, by what hasn’t beaten me down entirely, but right now I’m tired and I can’t sleep.

I’ve been looking at a picture of myself my sister posted the other day of me when I was four years old dressed up as Prince Charming.

I remember that costume so vividly. I was very disappointed by it. My Aunt Joyce made it. It was an adorable costume. There were gold sequins and a red paper heart. I should have liked it but I didn’t. It’s very clear from my expression in the photo that I was unhappy.

Of course I wanted to be Cinderella, not Prince Charming, and they knew it. I wanted a ball gown and glass slippers so this costume was a compromise.

At that age I was obsessed with a television production of ‘Cinderella’ starring Lesley Ann Warren. In it she sang, ‘In my own little corner in my own little chair I can be whatever I want to be.’

I loved that song. I sang it over and over while dancing on my tippy toes, or spinning in circles in the swimming pool at the YMCA pretending that the water swirling around my legs was my gown. Only when I was alone in my fantasy world could I be myself.

I guess that’s why I now live alone in a big fancy house with three cats. It’s only when I’m alone that I can be whatever I want to be.

As well-known as I’ve become, and no matter how much has been written about me over the years, it still feels like I can really only be myself when no one’s looking.