Tricia Macke, a news anchor for the Fox affiliate in Cincinatti, Ohio, is under fire for calling MSNBC’s lesbian anchor Rachel Maddow an ‘angry young man.’

The Gay and Lesbian Alliance Against Defamation and Equality Ohio have launched a petition calling on Fox 19 to condemn comments made last month by Macke on her her Facebook page.

In an exchange that also appears to have been since deleted, Macke also wrote: ‘I knew what I was saying.’

‘Macke owes an apology not only to viewers, but to young people in Ohio who are subjected to unfair bullying and harassment like this on a daily basis,’ said GLAAD President Herndon Graddick.

Macke has been with the station since 1992.

The petition states that Fox 19 and its owner Raycom Media ‘must take swift action to condemn Macke’s remarks, and Macke should make a full apology.’

It adds that ‘referring to Maddow as a ‘man’ because she is a gay woman is completely unacceptable for someone in the business of journalism. … Tricia Macke undoubtedly tried to insult Maddow because of their political differences, rather than simply because Maddow is gay – but her comments went much further than insulting Maddow’s political leanings, and took issue with Maddow’s gender, revealing an anti-gay (or at least anti-gender-nonconforming?) bias underlying her political beliefs.’ 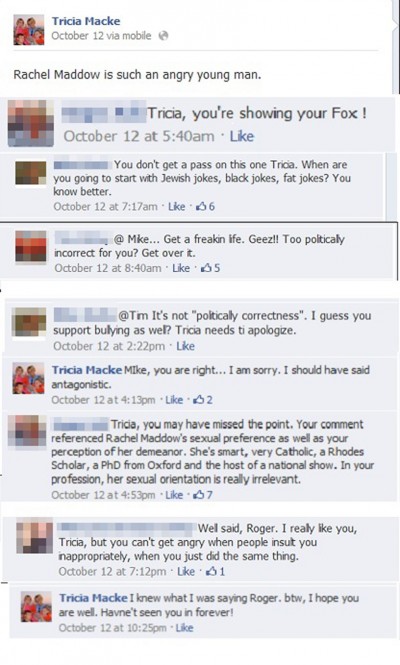