Mitch McCoy, a TV news reporter in Little Rock Arkansas, isn’t backing down from an anti- gay viewer who wants McCoy taken off the air. 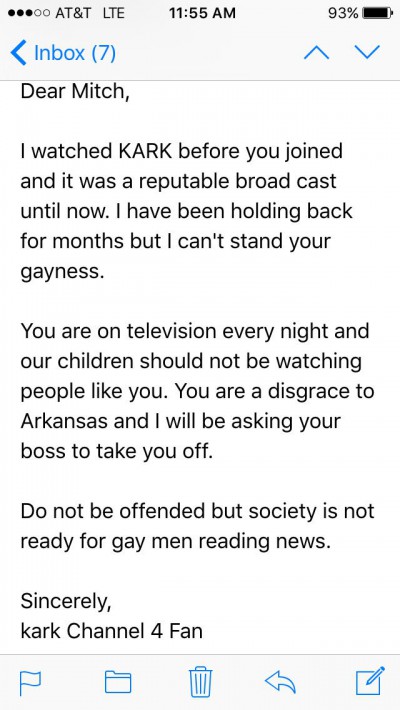 It stated in part: ‘I’ve been holding back for months but I can’t stand your gayness … our children should not be watching people like you. You are a disgrace to Arkansas and I will be asking your boss to take you off.’

The viewer added: ‘Do not be offended by society is not ready for gay men reading the news.’

Without mentioning other gay newsmen like CNN’s Anderson Cooper and MSNBC’s Thomas Roberts, McCoy took to Twitter to respond to the viewer directly.

‘I get many emails but this tops it,’ he tweeted to his more than 7,300 followers.

‘I’ve dreamt of being a reporter since I was 9 and I won’t stop on your behalf.’

The reporter for KARK4News (NBC) & FOX16News added: ‘No matter who you are or what you believe in – dream loudly and don’t let anyone get in your way.