From 1975 through 1979, Ron Palillo played a high school student Arnold Horshack alongside John Travolta’s Vinnie Barbarino and others on the ABC sitcom Welcome, Back Kotter.

Palillo died this morning at the age of 63 after being found by Joseph Gramm, his partner of 41 years.

He, Travolta, Robert Hegyes and Lawrence Hilton Jacobs played the members of an unruly group of remedial wiseguys known as the Sweathogs opposite Gabe Kaplan as their teacher.

His character was known for his high-pitched squeal of a laugh, thick Brooklyn accent and child-like demeanor. Horshack’s signature lines included his famous self introduction "Hullo (pause) How-wah-ya? (pause) I’m Ahhnold Horshaaaaack!"and "Ooh-ooh-ooooh!" which he would deliver impatiently when he thought he knew the answer to a question in class.

Palillo’s agent, Jacqueline Stander, told NBC News that Palillo had a heart attack and passed away in his sleep at his home in Palm Beach Gardens, Florida. His death comes just eight months after Hegyes, who played Sweathog Juan Epstein, also died of a heart attack.

Although Palillo shared his life with a man for more than four decades – including during the run of the show – he was not widely known to be gay. 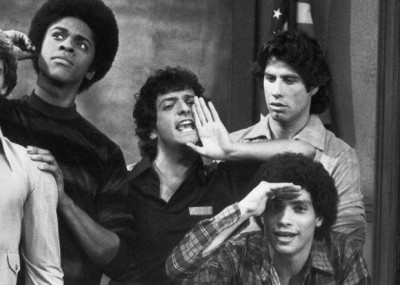